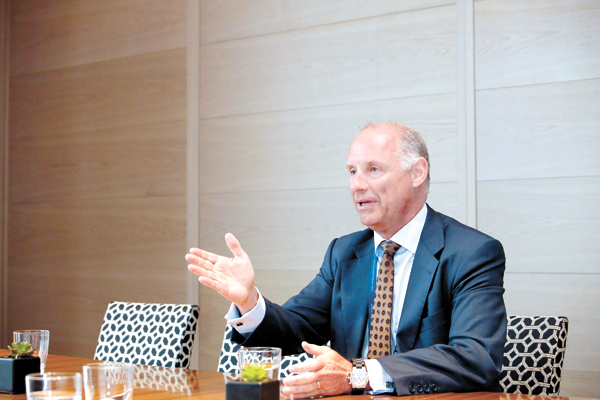 Per L. Saxegaard, founder and executive chairman of the Business for Peace Foundation, speaks about the Oslo-based NGO’s awards to business leaders who make the world a better place. Provided by UN Global Compact Network Korea

Per L. Saxegaard, founder and executive chairman of the Business for Peace Foundation, said he believes there are better ways of doing business by pursuing profits and promoting peace at the same time.

Saxegaard, who also runs an investment bank as a professional banker with 25 years of experience, launched the Oslo-based nonprofit organization in 2007 to annually award a group of businesspeople across the world whose businesses are not only for generating profits but also benefitting local communities and society.

“Making profits is not the purpose of business, but it is an outcome,” said Saxegaard in an interview with the Korea JoongAng Daily on May 19 at the Conrad Hotel Seoul on the sidelines of the UN Global Compact Korea Leaders Summit, which he attended as a speaker. “Once you shift your mindset to remember the real purpose of your business is not making money, then you start to contribute to work for society.

Since 2009, the foundation has awarded its annual “Business for Peace Awards” to a total of 36 businesspeople around the world who are running their business “ethically and responsibly.”

For nominating candidates, international organizations including the UN Development Program and the International Chamber of Commerce (ICC) recommend outstanding businesspeople to the foundation.

In early May, the foundation and the ICC announced awards to five winners for this year. One of them was Paul Polman, CEO of Unilever, for his dedication to doubling the size of the company while reducing carbon emissions.

Merill Joseph Fernando, the founder of Dilmah, a leading tea brand in Sri Lanka, was also named an honoree.

Fernando succeeded in producing a single-origin, unblended tea in the country. According to the foundation, he currently spends about 10 percent of the profits on helping local communities or sharing them with his workers.

The award is not meant for run-of-the-mill corporate social responsibility (CSR) programs, which some critics argue to be mere “greenwashing,” he said.

“CSR has often been seen in the vicinity of companies’ core businesses,” he said. “But what our winners do is related to their core businesses. It’s not something you write up in your annual reports [to promote your company].”

Saxegaard said Korean businesses running factories at the Kaesong Industrial Complex in North Korea could be on the list of candidates for the prize because they are contributing to keeping peace between the two Koreas by running factories in a geopolitical flash point.

“There is no Korean yet,” he said about his prize winners. “But the Korean businessmen [based in the Kaesong complex] could be strong candidates.”