Roh lashes out at Saenuri leader

Roh lashes out at Saenuri leader 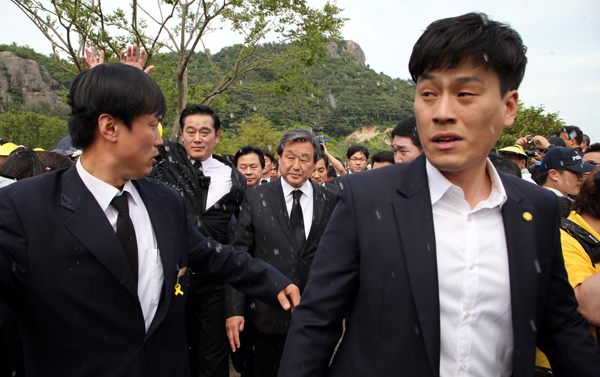 Some attendees douse Saenuri Chairman Kim Moo-sung with water at the ceremony to mark the sixth anniversary of the death of former President Roh Moo-hyun. [NEWSIS]

The only son of late former President Roh Moo-hyun openly and harshly criticized the chairman of the ruling party at a ceremony Saturday to commemorate the six-year anniversary of the statesman’s death.

The event was held Saturday at Bongha Village in Gimhae, South Gyeongsang, where Roh resided after his five-year term came to an end.

He committed suicide in May 2009 by jumping off a cliff behind his house after his family members and aides became embroiled in a bribery scandal.

The ceremony was attended by more than 3,000 visitors, including Kim Moo-sung, the leader of the ruling Saenuri Party, and Moon Jae-in, the chairman of the main opposition New Politics Alliance for Democracy (NPAD). It was the first time the chairmen from the ruling and main opposition parties attended the event together. 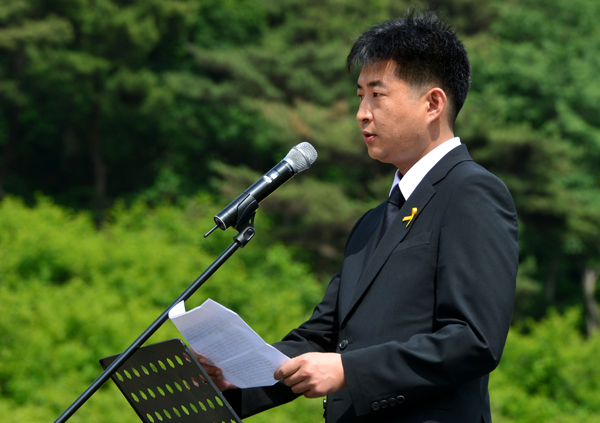 Roh Geon-ho, the late president’s son, gives his speech at the ceremony. [NEWSIS]

Witnesses reported that after greeting guests, Roh Geon-ho abruptly lashed out at Kim - the first time he has commented on issues regarding his father - referencing Kim’s part in the disclosure of the conversation between the late president and his former North Korean counterpart Kim Jong-il at the 2007 Inter-Korean Summit.

According to a 103-page transcript that ruling Saenuri Party representatives received from the National Intelligence Service (NIS) and released to local media in June 2013, President Roh told Kim Jong-il during a closed-door meeting that he did not accept the Northern Limit Line (NLL), the western maritime border between the North and South since the end of the 1950-53 Korean War. His remarks, however, were vague.

In 2014, the prosecution charged ruling party lawmaker Chung Moon-hun with revealing to reporters and the Saenuri Party part of the contents of the transcript from the 2007 meeting, which he read when he was a Blue House secretary during the Lee Myung-bak administration.

He was later indicted for violating the Act on the Management of Public Archives and fined 5 million won ($4,926). However, the prosecution cleared other Saenuri Party lawmakers and officials accused of similar charges, including Rep. Kim Moo-sung.

“We have a distinguished guest here today that I want to give my special thanks to,” Roh said. “I still vividly recall him reading [the transcript] on the campaign trail, insisting [my father] gave up the NLL. He’s made a difficult trip [to the ceremony].”

“After driving a former president to suicide, he even read the confidential document on the campaign trail,” Roh continued. “And now, he just tells the media [that he’s coming to the ceremony] and appeared. He appears to be such a generous man.”

As Roh made his remarks, some in the crowd, presumably loyalists to the late president, applauded and shouted at Kim.

“I hope [he] doesn’t use negative sentiment around Roh Moo-hyun or those who are pro-North in the general election next year, but I don’t think [he will] quit doing so,” Roh said, in a jab that played on the Korean idiom, “A dog will quit defecating first,” implying that Kim would continue to use the controversy around the late president as political ammunition.

“It sounds like an empty dream because he was never punished and has never regretted it.”

“We don’t need apologies or regrets anymore, but please take care of the country,” Roh continued. “If you distribute the conversation from the summit, which is a state secret, annihilate minority groups with your power, try to obtain more authority and pursue only private benefit, how is the fate of South Korea going to be as it is, surrounded by strong countries in this serious [international situation]?”

According to the Roh Moo-hyun Foundation that hosted the ceremony, Roh wrote the speech independently a day before the event.

Kim served as the executive director of incumbent President Park Geun-hye’s campaign during the 2012 election. On Dec. 14, 2012, while canvassing in Busan just five days before the polls, he read what he claimed was a recording of the conversation at the summit and insisted that President Roh had attempted to give up the NLL to North Korea.

Kim was later questioned about his remarks on the campaign trail, which were nearly identical to the confidential record archived by the NIS, and claimed he had gotten it from an unofficial report, denying his alleged connection to the spy agency.

He was acquitted in June 2013, after President Park was sworn in.

Kim did not respond to Roh’s attack, telling the JoongAng Ilbo that he “won’t say anything about it.”

The Saenuri Party has also largely remained silent, though some officials openly grumbled.

“We can’t fight the chief mourner when we are there to pay our respects,” said one ruling party official.

Some have speculated that Roh is attempting to upstart a possible political career. Though he has never mentioned an intention to join politics, he has been considered a viable candidate for the legislative elections since 2011.

“His commentary was more like a political speech, like he was trying to increase his influence by attacking Kim,” said a South Gyeongsang-based Saenuri representative.

His remarks Saturday also sparked criticism even among Roh Moo-hyun loyalists in the NPAD.

“I understand Geon-ho’s anger,” a representative of the Roh faction said, “but it’s inappropriate to swear at a person who came to show respect to the deceased.”