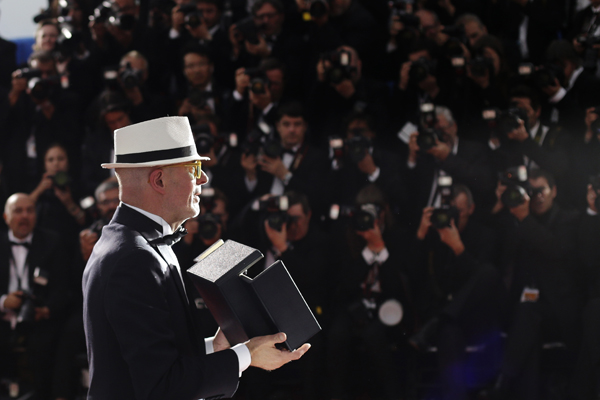 Director Jacques Audiard holds the Palme d’Or award for the film “Dheepan” as he poses for photographers during a photo call following the awards ceremony at the 68th international film festival in Cannes, southern France, on Sunday.[AP/NEWSIS]

The choice of “Dheepan,’’ as selected by a jury led by Joel and Ethan Coen, left some critics scratching their heads. While the dapper French filmmaker has drawn widespread acclaim for films such as “A Prophet’’ and “Rust and Bone,’’ some critics were disappointed by the thriller climax of Audiard’s film. “Dheepan’’ is about a trio of Sri Lankans who pretend to be a family in order to flee their war-torn country and are settled in a violent housing project outside Paris.

“This isn’t a jury of film critics,’’ Joel Coen told reporters after the awards ceremony, alongside fellow jurors like Guillermo del Toro and Jake Gyllenhaal. “This is a jury of artists who are looking at the work.’’

The win for “Dheepan’’ comes at a time when Europe is particularly attuned to the experience of immigrants, following the recent deaths of hundreds crossing the Mediterranean, seeking Italian shores. Jury members, though, said “Dheepan’’ was chosen for its overall strength as a film, rather than any topicality.

“We all thought it was a very beautiful movie,’’ said Ethan Coen. “Everyone had some high level of excitement and enthusiasm for it.’’

Audiard, springing to the podium at the Palais des Festivals, accepted the award with warm gratitude, bowing to the jury. He was joined by the makeshift parents of his film: Kalieaswari Srinivasan and Antonythasan Jesuthasan, who himself was Tamil Tiger child soldier before finding political asylum in France.

“To receive a prize from the Coen brothers is exceptional,’’ said Audiard, who added that only receiving one from the Luc and Jean-Pierre Dardenne, the Belgian filmmaking siblings, could equal it.

The runner-up prize, the Grand Prix, went to “Son of Saul,’’ a grim Holocaust drama by first-time Hungarian director Laszlo Nemes. Some expected Nemes’ horrifying plunge into the life of an Auschwitz worker to take the top award, but it’s been 26 years since a debut film (Steven Soderbergh’s “Sex, Lies, and Videotape’’) was given the Palme.

“Europe is still haunted by the destruction of the European Jews,’’ said Nemes. “That’s something that lives with us.’’

The best actress prize was split but not the way some expected. It was given to both Rooney Mara, half of the romantic pair of Todd Haynes’ 1950s lesbian drama “Carol,’’ and Emmanuelle Bercot, the French star of the roller coaster marriage drama “My King.’’ (Bercot also directed the festival opener, “Standing Tall,’’ about a delinquent teenager.) Any split was presumed to go to Mara and her “Carol’’ co-star, Cate Blanchett.

Best actor was awarded to Vincent Lindon, the veteran French actor of Staphane Brize’s “The Measure of a Man.’’ He plays a man struggling to make a living after a long period of unemployment. The visibly moved Lindon won over some big-name competition, including Michael Caine, the star of Paolo Sorrentino’s unrewarded “Youth,’’ a wry, melancholy portrait of old age.

Lindon’s award added to a banner year at Cannes for France, which had five films out of the 19 in competition and went home with three awards.

Yorgos Lanthimos, a Greek filmmaker working in English for the first time, took the jury prize for his “The Lobster,’’ a deadpan dystopian comedy, starring Colin Farrell and Rachel Weisz, about a near-future where unmarried singles are turned into the animal of their choice.

The Coens took the Palme in 1991 for “Barton Fink.’’ The last two Cannes winners have been three-hour art-house epics: the glacial Turkish drama “Winter Sleep,’’ chosen last year by Jane Campion’s jury, and “Blue is the Warmest Color,’’ as picked by Steven Spielberg’s jury.

This year’s competition slate left some critics calling it a so-so year for Cannes. Some of the films that drew the biggest raves (“Mad Max: Fury Road,’’ Pixar’s “Inside Out’’) played out of competition, while some in it (like Gus Van Sant’s “The Sea of Trees’’) drew loud boos.

The festival was dominated by discussion about gender equality with many - from Blanchett to Jane Fonda - speaking about female opportunity in the movie business. “You hope it’s not just the year,’’ said Blanchett of the attention to women in film. “It’s not some sort of fashionable moment.’’ An honorary Palme d’Or was also given to French filmmaker Agnes Varda, the first woman to receive one and only the fourth director after Woody Allen, Clint Eastwood and Bernardo Bertolucci.

But the festival was overrun by an unlikely scandal when several women were turned away from a premiere for wearing flat shoes rather than high heels.

The festival, as it often is, was dominated by the unexpected, even on its last night. Nothing was more unforeseen - not even the Palme for “Dheepan’’ - than John C. Reilly, a co-star of “The Lobster’’ and another competition entry, “Tale of Tales,’’ took the stage to sing “Just a Gigolo’’ in a bright white suit.