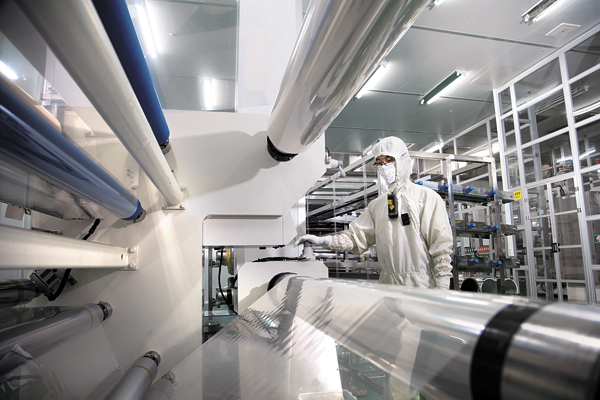 A worker at Samsung SDI works on producing polarizing film at the company’s plant in Cheongju, North Chungcheong. Provided by the company

Samsung SDI, a manufacturer of batteries and components for solar energy and displays, wants to boost its display business in China by building a new factory there to manufacture polarizing film, a core component in LCD panels.

The company signed a memorandum of understanding with the city of Wuxi, Jiangsu Province, on Monday to build the factory in the city’s commercial district.

With some 200 billion won ($182 million) allotted for construction, the production line will be capable of producing 30-40 million square meters (7,413 acres) of polarized film annually, the company said in a statement.

To put it in more understandable terms, the factory will churn out polarization sheets for some 30 million 48-inch LCD televisions when it is completed and in full operation next year.

The company said the decision was strategic as the China market is expected to lead consumption of large LCD panel TVs.

“The reason we chose China is because it will emerge as one of the biggest markets for polarizers for big TV displays,” the company said in a statement.

“When the second factory is built in China,” the company said, “The capacity to produce the film will greatly improve and we can swiftly meet growing demand from Chinese clients.”

The polarizing film market is expected to grow at an average rate of 6 percent worldwide, but the China market will see annual growth of 16 percent by 2020, according to Samsung SDI.

The company said the focus of the new plant is to make film used for TVs bigger than 50 inches as the demand for large TVs has grown worldwide, especially in China.

Most of the film produced will be supplied to display makers in Suzhou in Jiangsu.

Samsung SDI CEO Cho Nam-seong and Li Xiaomin, party secretary of Wuxi, attended a signing ceremony at the Pullman Hotel in the city on Monday.

“With China becoming a target market for polarizing film for large TVs, we succeeded in having a production base for the film that serves the market,” said the CEO.

“Samsung SDI will develop high-valued components for next-generation TVs as a primary growth engine,” he said.

In a conference call in January, the company hinted at the possibility of building a plant in China.

“Samsung SDI has made efforts to increase the capacity of display parts,” said Song Jae-gook of the electronic component division.

The company reportedly targeted Suzhou, but there was disagreement with the city government, prompting it to look to the neighboring city of Wuxi.