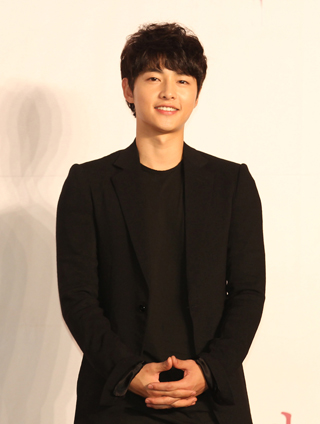 Actor Song Joong-ki, who began his mandatory military duty in August 2013, was discharged on Tuesday morning.

Several news reporters and international fans congratulated Song for completing his conscription period by putting up banners and holding placards in front of his camp, located in Goseong County, Gangwon.

During a press briefing held that day, Song mentioned that he misses his family, friends and people from his entertainment agency.

He added that he is glad he will be able to see them easily now that he has completed his military duty.

While Korean men serve in the military they cannot freely leave their camp.

The actor also told reporters that watching Hanwha Eagles baseball games and Lee Kwang-soo from the variety program “Running Man” on TV gave him a lot of strength and comfort while fulfilling his duty as a soldier.

The 29-year-old will mark his comeback with the new KBS2 drama series “The Sun’s Descendent” (working title).

The upcoming drama, which is planned to air in the second half of this year, portrays the love between a United Nations peacekeeping soldier, Song, and a volunteer doctor, which will be played by one of the top Korean actresses, Song Hye-kyo.

Song will begin learning the script for the new drama this week. The first shoot will take place in early July, according to a person affiliated with the series.

The actor made his debut in 2008 with the film “A Frozen Flower.” Since then, he has continuously appeared in various movies as well as TV dramas.