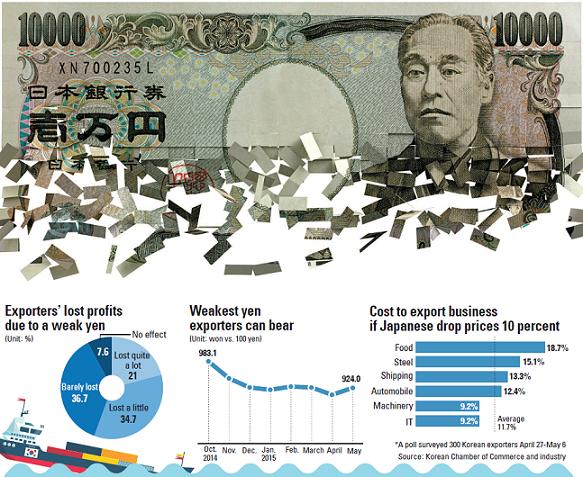 More than half of Korean exporters expect to see an average 12 percent drop in profits due to the decline in value of the yen, according to a poll by the Korean Chamber of Commerce and Industry.

According to the survey of 300 Korean exporters from April 27 and May 6, 55.7 percent said they have lost profits due to the weak Japanese currency.

Exporters in the steel industry expressed the lowest tolerance for the yen’s slide, citing a break-even point of 963 won per 100 yen.

“Many Japanese shipbuilders are increasingly shifting to domestic producers after the yen’s drop,” said a Korean exporter of shipping components.

The yen’s plunge also puts Korean exporters at a disadvantage against their Japanese competitors in China, according to an exporter of semiconductor machines.

If the devaluation of the yen leads to steady price cuts by Japanese exporters, the most affected sector in Korea would be the food industry, the survey showed.

When asked how much export volume they would lose if Japanese competitors reduced their prices by 10 percent, Korean exporters estimated 11.7 percent.

Exporters in the food industry said their volume would plummet 18.7 percent, followed by the steel industry (15.1 percent), shipping (13.3 percent) and automobiles (12.4 percent).

“Our share of the yogurt market in the United States is being eroded by Japanese exporters,” said a midsize Korean producer of dairy products. “The competition in the Japanese market is even tougher, resulting in a decline of a third in our exports there.”

Despite losses attributable to the weak yen, about 70 percent of Korean respondents said they have taken no specific measures in response.

Bank of Korea Gov. Lee Ju-yeol on Tuesday expressed his concern over the continuous slump in the export-driven economy.

“Korea’s ratio of exports to gross domestic product, which shows our economy’s dependence on exports, amounts to 40 percent, compared to only 10 percent in other developed countries,” Lee said at a meeting with government officials. “There are factors that won’t be resolved in the near future, such as the slowdown in China and weak yen. I am worried about a further slump in our exports.”

His concerns come against the backdrop of Federal Reserve Chair Janet Yellen hinting that the U.S. central bank will likely start reining in its loose monetary policy by raising interest rates.

This is expected to further affect Korean export competitiveness compared to the yen and euro.

Central banks in Japan and Europe have been aggressively pushing to increase their levels of liquidity.