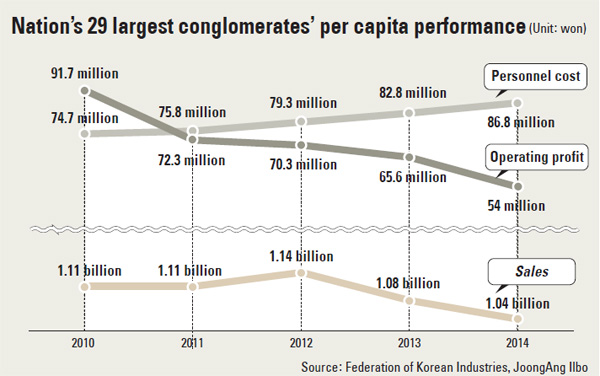 Over the past five years, 29 of the nation’s largest conglomerates have spent more on personnel-related expenses, mainly due to steadily increasing salaries and early retirements, than they reported in operating profit.

According to a report released Tuesday by the Federation of Korean Industries (FKI) on profitability and personnel costs from 2010-4, personnel costs increased an average of 3.8 percent per year.

Overall sales of the conglomerates steadily increased over the past five years. As a result, the number of employees rose from 712,390 in 2010 to 855,430 last year.

Meanwhile, the affiliates’ annual spending on personnel costs - salaries, retirement pay and employee welfare - rose an average of 3.8 percent a year, from 74.7 million won in 2010 to 86.8 million won last year.

The main reason was the increased pay for regular workers, according to the report.

The FKI report warned these are dangerous signs, because personnel costs will rise at an even faster pace next year due to the peak wage system and extended retirement age.

“That is why the Korean labor market should be reformed as soon as possible to make the salary system based on performance, instead of seniority,” said Lee Cheol-haeng, head of the FKI labor welfare team.