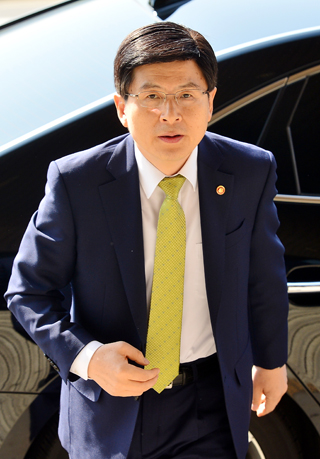 Ruling and opposition lawmakers geared up to question President Park Geun-hye’s prime ministerial nominee Hwang Kyo-ahn after the Blue House submitted a motion to the National Assembly on Tuesday to confirm her decision to appoint the current justice minister.

During a cabinet meeting earlier in the morning, Park asked the National Assembly to cooperate with her plan.

“In addition to the economic revival and major reforms, the government is also pushing forward with pressing political and social reforms, which includes the eradication of corruption,” she said. “That’s the people’s demand and a matter that will decide our country’s future. For Hwang to push forward with these grave tasks, I ask for the National Assembly’s cooperation.”

The legislature has until June 14 to complete the confirmation process, and the presidential office has expressed hope that it will complete the hearing and approve Hwang’s nomination before Park leaves for the United States in mid-June.

A confirmation hearing and a vote are mandatory for the president to appoint a prime minister. A majority of the National Assembly members must attend the vote, while a majority of attending lawmakers need to approve the motion for the prime minister to be appointed.

Of the 298 lawmakers in the legislature, the ruling Saenuri Party alone commands 160 seats, enough to appoint Hwang as the prime minister if necessary.

After nearly a month of deliberation, Park nominated Hwang on Thursday as her next prime minister. The position was left vacant for 24 days since the resignation of Lee Wan-koo, who stepped down over allegations related to a massive payoff scandal that upended the political establishment.

Hwang, 58, a former prosecutor with a record for pursuing anti-state crimes, joined the Park administration as justice minister in March 2013, when the president first created her cabinet. He is also one of the few ministers to have managed to survive the administration’s near-frequent reshuffles over the past few years.

The main opposition New Politics Alliance for Democracy (NPAD) has vowed to conduct a microscopic examination on Hwang, labeling him a “prime ministerial nominee for a security state,” while the ruling Saenuri Party has argued that since he already passed his previous confirmation hearing for justice minister, there should be no question about his ethics and abilities.

One key issue revolves around the significant salary Hwang earned as a lawyer after he retired from the prosecution. After ending his career at the Busan High Prosecutors Office in August 2011, Hwang worked for 17 months for a law firm, where he earned 1.59 billion won ($1.45 million) total.

During his confirmation hearing for justice minister in 2013, Hwang said he was willing to donate the money, which lawmakers claimed was given to him as special treatment as a former prosecutor in return for his influence among sitting judges.

It was unclear whether he followed up on his promise, and Hwang said he would address the issue directly at the upcoming hearing.

“After he became justice minister, his assets actually increased,” NPAD Rep. Sul Hoon said in an interview with TBS radio. “That means he didn’t donate the money.”

However, in another interview with KBS radio, Saenuri Rep. Kim Jin-tae was quick to defend Hwang.

“He will probably do the job a 100 times better than someone like former Prime Minister Han Myeong-sook [of the NPAD],” Kim said. “Special treatment as a former prosecutor is not illegal; he just happened to receive more money in 2013 than most ordinary people. We must think about this issue carefully and within the constitutional framework.”

The NPAD has claimed Hwang has not made public what cases he retained as a lawyer, and since then, the National Assembly has passed a revision on the law requiring that lawyers make public such details.

“The revision was called the Hwang Kyo-ahn law at the time, and he is now facing a confirmation hearing once again,” NPAD Rep. Lee Un-ju said. “He must quickly and transparently state what cases he retained as a lawyer.”

Hwang’s exemption from military service is also expected to be an issue. While studying law at Sungkyunkwan University, Hwang delayed his physical exam for the military three times. In July 1980, he was exempted from conscription for a chronic rash. He passed the bar exam in 1981.

Of the 3.65 million men exempted from the military duty over the past decade, only four were excused for a chronic rash, the opposition party stated in questioning the validity of Hwang’s case.

“If he was exempt from military duty due to a rash, it must have been a serious condition for both his mental state and body. But he passed the bar exam the very next year,” Representative Sul said. “How could he have managed to do that?”

Hwang earlier said that he was treated for the condition over 17 years, since 1977. No medical records are available to verify, however, because hospitals are only required to keep records for 10 years.

The upcoming confirmation hearing will also focus on Hwang’s political standing. Throughout his career in the prosecution, Hwang had a record for pursuing anti-state crimes, which even earned him the nickname, “Mr. National Security Act” after he wrote a book on the controversial law.

Liberal NPAD members had strongly condemned the president’s decision to name Hwang as prime minister, fearing he will not be politically neutral in running state affairs. The ruling party, however, has said the opposition is taking an outdated approach to his nomination.

“The public may agree if the opposition argued that Hwang was incapable of lifting the economy based on the fact that he served 30 years in the prosecution,” Saenuri Rep. Park Min-shik told YTN radio. “But it’s a completely outdated approach to say that he’ll turn the country into a security state.”

The NPAD has also questioned Hwang’s political neutrality in some cases that he handled as justice minister in the Park administration.

As minister, he has overseen a series of controversial investigations, including the probe into allegations that the National Intelligence Service waged a cyber-smear campaign against Moon Jae-in, Park’s opponent in the 2012 presidential election.