Selling the case for relations with Japan

Selling the case for relations with Japan 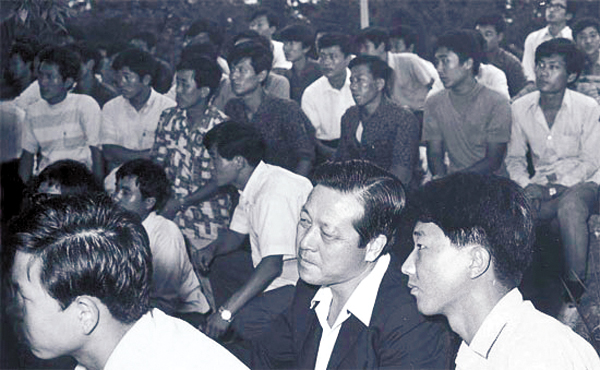 A 45-year-old Kim Jong-pil, second from right, visited Seoul National University to talk to students calling for an end to military drills that were part of the mandatory school curriculum on Aug. 25, 1971. Provided by Kim Jong-pil

It took three years for Korea and Japan to finalize negotiations regarding the renormalization of diplomatic ties after the so-called “Kim-Ohira Memo,” which specified the amount of compensation for Japan’s colonial rule, was drawn up in November 1962. The delay was sparked by opposition to the deal in both countries.

On March 20, 1964, I revisited Tokyo to finalize the deal to open diplomatic relations. I met with Foreign Minister Masayoshi Ohira and Prime Minister Hayato Ikeda and reached an agreement that we would conclude the negotiations by holding additional talks in early April.

Tensions were on the rise in Seoul against any deal with Japan. On March 24, 1964, over 3,000 university students held a protest at Seoul National University over the Korean government seeking diplomatic normalization with its former colonizer. They adopted a resolution urging Korean officials to immediately withdraw from negotiations and return home. The protestors characterized me as a person willing to sell his country for the sake of money.

Tension was also escalating around the Hilton Hotel in Tokyo, where I was staying on March 25 to resume talks with my Japanese counterparts. There were about 400 Korean-Japanese students who belonged to an organization with close ties to North Korea called the General Association of Korean Residents in Japan. The police warned me that some had knives. I asked the police to bring two dozens protestors to my room so I could have a talk with them. One of the students selected began verbally attacking me right after he entered the room. Speaking in Japanese, he accused me of selling out the country for foreign capital and allowing the subjugation of the Korean economy by Japan. “Stop the negotiations,” the student said. 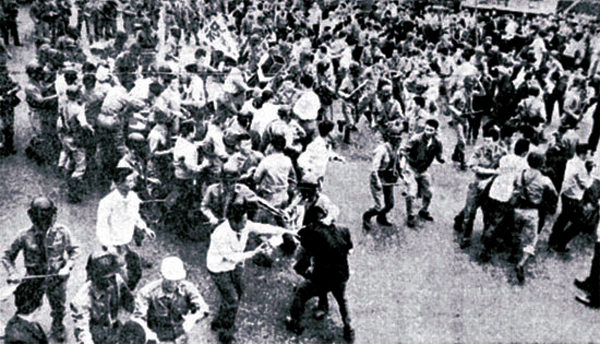 Over 15,000 university students took to the streets on June 3, 1964, to protest the government’s negotiations to forge diplomatic ties with Japan and to demand President Park Chung Hee step down. To quell the demonstrations, Park declared martial law effective 8 p.m. the same day. [JoongAng Photo]

These students were part of Japan’s elite as they were enrolled at prestigious schools such as Waseda and Keio universities and were second or third generation Korean immigrants to Japan. None could speak Korean fluently.

After listening to their arguments for some time, I blurted out, “You call me a traitor. But when you profess your love for your homeland, you can’t even say it in Korean.”

I continued, “You have no idea how backward your homeland is. If you want to see the reality, I will take you guys to Korea and to show you what it is like there. You and I are in totally different positions. I carried out a revolution [the 1961 coup by Park Chung Hee] in order to modernize Korea and therefore I take great responsibility for making it happen. I have no priorities other than making my country prosperous, a mission for which I have put my life on the line.”

The 20-some students began nodding and went down to the hotel lobby without causing trouble. When I also went down to the lobby, I saw the students who had come to my room in a brawl with other Korean-Japanese students, who must have thought they had been hoodwinked by my words.

On March 27, President Park Chung Hee told me to return to Korea. I was warned that there would be a huge protest rally at Gimpo International Airport against the diplomatic negotiations. I was determined to face the protestors and persuade them of the need to reopen diplomatic ties with Japan.

I called the authorities in Seoul and told them to prepare a microphone and an ambulance at the airport in case I was injured by protestors. I was determined to tell my side.

But when I arrived at the airport the next day, there was no rally. I thought I should visit university campuses, where much of the rallies protesting the diplomatic deal were taking place to directly convey my reasoning and logic for renormalizing relations with Tokyo.

On April 9, I visited the Education Department of Seoul National University, which I attended before I joined the military academy in my 20s. About 3,000 students were taking part in a heated discussion about their protest of the ongoing talks with Japan.

Standing before the students, I said, “Look at the geopolitical position our country is in. To our west, there is Communist China and to our North is the Soviet Union. To our south, there is nothing but a scattering of islands. We only have Japan to our east. In order for us to survive and become a prosperous nation, we must make the best out of Japan as a stepping stone to reach the rest of the world. I understand your anger toward Japan. But we have no choice but to form relations with them to survive. We can’t delay getting our compensation settlement from Tokyo to use it for the foundation of our economic growth. If we don’t, the future of our nation will be bleak.”

I also said diplomacy is, in essence, a series of compromises. “Without making compromises, nothing can be agreed upon,” I said. “But I never took a lowly position when discussing the amount of compensation in the settlement.”

My speech succeeded in making them understand the logic behind the government’s move to open diplomatic relations with Japan. I went on a tour of other university campuses delivering my defense for the negotiations.

While students seemed to understand the need to forge ties with Japan when they heard me out, the anti-treaty demonstration showed no sign of diminishing. Tens of thousands of students were in the streets demanding a withdrawal from the talks.

Years later, I would run into people who had hit the streets during their college years to protest against me. They often told me that they now understand my passion and sincere wish to make Korea prosperous by forging ties with Japan. I would tell them that I also knew they had great love for this country and that they and I only had different ways of expressing our love for it.

On June 3, over 15,000 students from 18 universities in Seoul took to the streets rallying against the Korea-Japan talks. It was the largest demonstration. They called for President Park Chung Hee’s resignation, even though he had been inaugurated only six months earlier. Sensing the situation could spiral out of control, Park declared martial law.

On June 18, I boarded a plane with my wife Park Young-ok and went globe-trotting.