The dire need for normalization

The dire need for normalization

Kim Jong-pil, left, meets with then-Chairman Park Chung Hee of the Supreme Council for National Reconstruction on Nov. 13, 1962 in Seoul, a day after Kim had reached a tentative agreement with his Japanese counterpart Masayoshi Ohira on the amount of compensation for Japan’s occupation of the Korean Peninsula. Provided by Kim Jong-pil

I was as determined to lead the talks on normalizing diplomatic ties with Japan as I was to take part in the 1961 revolution [coup]. I took part in the talks as though I was putting my life on the line. The task was something that had to be achieved for the sake of Korea, but it was something nobody wanted to do because of the anti-Japanese sentiment back home. Breaking through that mindset to forge ties with Tokyo was my mission as head of the Korean Central Intelligence Agency. Forging ties with Japan in exchange for winning compensation for its 36-year-occupation of the Korean Peninsula was something President Park Chung Hee must accomplish so he could lay the groundwork for economic growth. We also felt the urgent need to open diplomatic relations with Tokyo to avoid diplomatic isolation in the region given that to our west was the Communist China and to the north was the Soviet Union. I participated in the negotiations fully aware of the changing geopolitical dynamics under which Korea was placed.

On June 23, 1965, President Park stood at a podium to declare the signing of a treaty that formally restored diplomatic relations between Seoul and Tokyo. It was one day after the two countries sealed the deal following years of countless negotiations. Listening to his landmark speech at the ruling party headquarters, I was emotionally overwhelmed as I was reminded of all the hard work my colleagues and I had put into making the deal possible.

“Over the past decades, we lived with a deep sense of anger and resentment toward the Japanese for what they did to us. They took away our liberty and claimed the lives of beloved parents and siblings,” said Park sternly before a camera.

“Though there is no doubt that Japan could be conceived as our foe of yesterday, we must join hands with the Japanese because we need them for our present and future. Isn’t this the direction our country should be heading for the sake of our prosperity?” 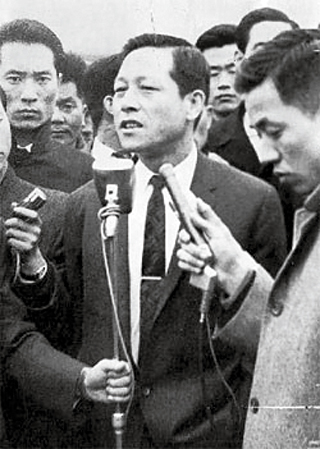 Kim Jong-pil talks to reporters upon returning from Japan on March 28, 1964, after finalizing terms for a diplomatic normalization treaty. [JoongAng Photo]

Park’s heartfelt remark that day reflected many conversations I had had with him, during which we often talked about the irrevocable need for us to offer our hands to Japan. It was what we needed for our future.

Park also emphasized the importance of having pride and a sense of sovereignty for Koreans, pointing out that many were frightened of the prospect of Korea becoming subjugated to Japan’s economy should relations be normalized. Park stressed that Korean people should be more confident and not afraid of competing with the Japanese.

“I understand that some are criticizing our treaty, saying it is the equivalent to a Japanese invasion of our economy and military. Some go so far as to call the treaty anti-Korean. I want to ask this question to them: “Why are you so afraid of directly dealing with Japan under this tremendous sense of inferiority and so easily assume that we will be defeated by Japan in all areas once we have normal relations?” I want to say that such a lowly posture is what we need to discard right away. Whether we are able to draw a positive outcome from restored relations with Japan hinges on us being more confident in ourselves so that we can make the best of this.”

Park continued by addressing the Japanese.

“I wish to give my thoughts to people in Japan on the occupation of Korea: I do not think the current generation [born after the end of World War II], should bear the brunt of responsibility for the suffering and atrocities Japan inflicted upon us in the past. Nevertheless, they should never overlook the pain and agony Koreans endured that are lasting to this day. If Koreans question the sincerity of the Japanese in their apology for past wrongdoings and see Japan as untrustworthy, every effort we have put into making this treaty possible will be in vain.”

With the compensation payments we received from Japan [worth $800 million in total], Park wanted to build a steel production facility. I can guarantee that Park did not waste a dime from the settlement and spent all of it for the good of the country by setting up an industrial infrastructure to outpace North Korea in terms of economic growth.

Japan’s former colonies received compensation payments ranging from $200 million to $500 million for its unjust occupation. These former colonies included Myanmar, Indonesia, the Philippines and Vietnam, as well as others. But most of them blew their chance to use the capital to build their economies. They spent them on building tourist resorts or handing them out to their citizens instead of investing them in long-term national projects.

I think it was the foresight of a national leader and his commitment to the good of the nation that differentiated Korea from Japan’s other former colonies, enabling it to become an economic powerhouse within such a short period of time while others lagged behind and remained underdeveloped nations.

Park had unwavering faith in me in my role within the crucial negotiations with Japan. He entrusted all authority in me for the negotiations. Sometimes those close to him suggested that I be withdrawn from my position because of their struggle for power. Park never relented. Even when I decided to go overseas in an effort to quell rising demonstrations against the treaty negotiations in 1964, it was not as if he ordered me to leave the country as a punishment. He gently asked me to consider leaving the country until the situation stabilized.

This year marks the 50th anniversary of the normalization of relations and those relations have never been worse than they are now. Prime Minister Shinzo Abe of Japan and other rightwing politicians in Tokyo seem to have backward historical perspectives that do nothing but strain ties with its two neighbors, Korea and China. Facing such a diplomatic quagmire, the Korean government should maintain its cool-headedness and tenacity in dealing with Japan. We do not need to refute every provocative or illogical claim that Japanese politicians make.

In terms of the territorial dispute over the Dokdo islets, Japan wants to make a fuss so it can internationalize the dispute. All we have to do is make clear our strong resolve to maintain control over Dokdo. It is also important for us to make Japan realize that it has no choice but to go to war with us if it wants to take over the Dokdo islands.

On the comfort women issue, Japan has been avoiding making a formal apology and acknowledging the fact that the program was run by its government. From what I see in the Abe government, it seems unlikely that any meaningful change will come any time soon. But we must continue to raise our voice and demand an apology over Japan’s outright violation of human rights and the violence it orchestrated in the first half of the 20th century.