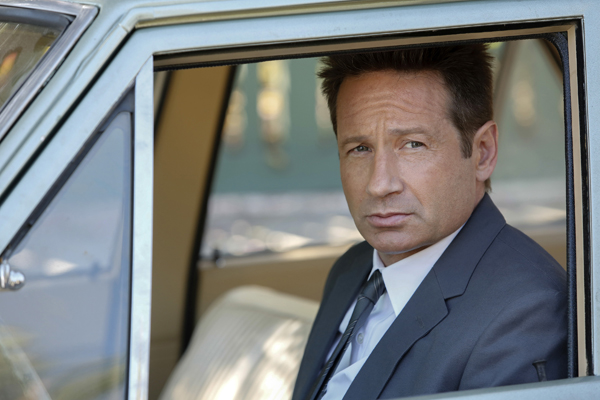 This photo provided by NBC shows David Duchovny as Sam Hodiak in a scene from the episode, “Home Is Where You’re Happy,” from the new NBC television series, “Aquarius.” Duchovny plays a Los Angeles police detective working a case involving Charles Manson. The show premieres Thursday in the United States. [AP/NEWSIS]

LOS ANGELES - Between wrapping “Californication’’ and the return of “The X-Files,’’ David Duchovny is making a detour to the mind-bending 1960s.

In NBC’s drama “Aquarius,’’ he plays a Los Angeles police detective whose search for a missing teen leads to a would-be rock star destined to become the era’s bogeyman: Charles Manson.

“Aquarius,’’ which airs weekly after its Thursday debut, also will be available online. In a network experiment that echoes a Netflix-style release, NBC is putting the full 13-episode season on NBC.com, the NBC application and other video-on-demand platforms following the premiere.

The series gives Duchovny the chance to play a character far different from his hallmark TV roles of a sex-obsessed writer on Showtime’s dark romp and a rule-breaking FBI agent from Fox’s eerie 1993-2002 drama.

“He is walking around looking at these kids with long hair and thinking, ‘This is what I killed for? This is what I would have been killed for?’’’ Duchovny said. “In many ways he’s the perfect guy to look through Manson. Manson’s a fake ... a 35-year-old guy manipulating young girls.’’

But in the polarized ’60s, Manson was co-opted as a symbol of the dangers of social upheaval, the actor said. The series opens two years before the 1969 Tate-LaBianca murders, among the killings that led to the convictions of Manson (played by Gethin Anthony, “Game of Thrones’’) and his followers.

Duchovny said he wasn’t deliberately trying to distance himself from his past work by portraying a tough police officer with a crew cut.

Hodiak, who’s going through a divorce and harbors creative passions, is a complex man, not a stereotype like the stoic police hero in TV’s old “Dragnet’’ series, Duchovny added.

“He’s not Sgt. Joe Friday. But you’d probably think Joe Friday was Joe Friday night’’ if you met him, said Duchovny, smiling. It’s a pun worthy of his wry “X-Files’’ hero Mulder, whom he’ll play again in a six-episode sequel set for January.

Duchovny, 54, hasn’t been kicking back while awaiting production on the Fox series. His debut album, “Hell or Highwater,’’ was released earlier this month - “I found out I was a musician really late in life’’ - and a second novel, after the well-received “Holy Cow,’’ is upcoming.

At this moment, he was hawking his tunes.