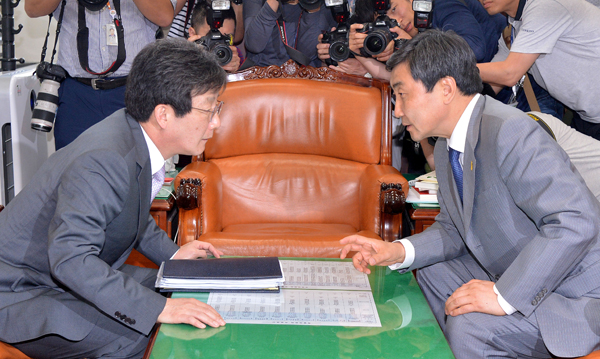 The government’s ambitious plan to overhaul the money-losing pension system for civil servants faced another obstacle Thursday as ruling and opposition lawmakers delayed a promised vote due to wrangling over an issue completely irrelevant to the task at hand - a planned investigation into the 2014 Sewol ferry disaster.

The ruling Saenuri Party and main opposition New Politics Alliance for Democracy (NPAD) previously agreed to hold a vote at 2 p.m. Thursday to approve 54 bills, including the plan to reform the pension plan for government workers.

However, a vote has yet to take place as of 8 p.m. as the two sides struggled with a plan to investigate the tragic sinking of the Sewol ferry.

The enforcement decree for the special law governing the Sewol’s sinking was approved by the cabinet on May 6, though the NPAD has demanded the plan be revised.

According to opposition lawmakers, a civilian expert - not a government official - must be appointed to manage a special committee tasked with investigating the ferry’s sinking.

A section chief from the prosecution is to be appointed as the first manager of the probe.

The NPAD has also demanded that the committee’s mandate, which already began in January, be extended to one year after its formation is complete.

The Saenuri Party, however, said the issue could be addressed in the June session, asking the NPAD on Thursday to approve the series of pending bills as previously agreed.

At 4 p.m. Thursday, the floor leaders of the ruling and opposition parties and their deputies sat down for a final negotiation to narrow down their differences. The meeting ended around 6:40 p.m., and negotiators reported back to their fellow party members to get an approval for what they had agreed upon. They refused to make public the final deal, while the vote was rescheduled for 10 p.m.

Before heading to the talks, Rep. Yoo Seong-min, the Saenuri floor leader, told fellow lawmakers to stay inside the National Assembly to wait for the vote.

“The session may open very late today,” he said. “I ask you to remain here.”

“Most people think it is ridiculous to link the Sewol ferry investigation with the overhaul of the civil servant pension,” Yoo said. “It’s unclear if the opposition party is actually willing to pass the pension reform bill.”

Yoo also said he had already discussed the issue several times with the Blue House and Minister of Oceans and Fisheries Yoo Ki-june, though their stances were adamant.

“This is an issue on which we cannot concede,” he said.

Saenuri Chairman Kim Moo-sung added that the National Assembly must approve other pressing bills concerning the public’s livelihood and the economy, which Yoo said he would propose during final negotiations with his NPAD counterpart.

The opposition party, however, showed no signs that it would concede.

“Our party made one demand - to appoint a civilian as the Sewol investigation manager - and promised to concede on everything else,” said NPAD Rep. Lee Jong-kul, the party’s floor leader. “But the Saenuri Party is refusing to accept that one demand. For a vote to take place today, the Saenuri Party must accept our demand.”

Past administrations have made attempts to reform the debt-stricken civil servant pension system, but all efforts - in 1995, 2000 and 2008 - fell apart in the face of massive opposition by unionized government workers.

Wrapping up months of wrangling over the scope and depth of the changes to be made to the civil servant pension system, the ruling and opposition parties signed a deal earlier this month to reform the program by increasing government workers’ monthly contributions while reducing their entitlement payments.

The plan consumes about 10 billion won ($9.05 million) daily just to stay afloat. The deal, however, fell apart once again after Park criticized the two main political parties for including a change in the national pension system on the sidelines of the agreement.

The government said the change will require about 1,669 trillion won by 2083, while Park denounced the legislature for pushing ahead with a misleading, populist reform plan for the national pension by exploiting its mandate to overhaul the civil servant pension system.

Since then, the two sides forged another plan to reform the pension plan for civil servants and agreed to vote Thursday, the final day of the May parliamentary session.

The prospect of the pension reform, however, faced new obstacles Wednesday when the NPAD suddenly brought up the change in the Sewol ferry investigation plan.

The two sides conducted negotiations over 12 hours on Wednesday, but failed to reach a compromise.