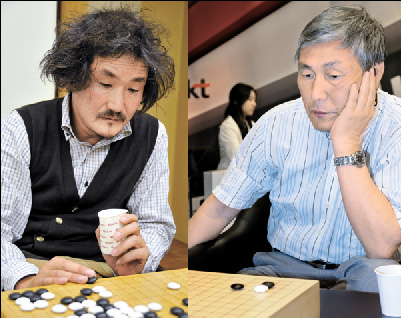 Modern baduk, also known as Go, marks its 70th anniversary this summer, an exciting prospect for fans of the strategy board game.

A special match between Cho Hoon-hyun, 62, and Cho Chi-hoon, 59, is scheduled for July 12 in Seoul - 12 years since the two players last confronted each other.

Modern baduk in Korea dates back to 1945, when Cho Nam-chul (1923-2006), a pioneer of the game’s more international variant, established the Hansung Baduk Club, the predecessor to the current Korea Baduk Association (KBA).

According to the KBA, a variant of the game known as Sunjang baduk was played in Korea until around the end of the Joseon era (1392-1910). In this version, eight black stones and eight white stones are placed on the board to start, while the first move is given to the black piece placed in the center.

Modern baduk emerged during the 20th century, when international rules for the game became just as popular. Since then, modern Korean baduk has come in to its own, and both Chos have made huge contributions to its development.

But despite being based in different places, Korea and Japan, Cho Hoon-hyun and Cho Chi-hoon have one commonality: They each dominate their home country’s baduk league.

Cho Hoon-hyun, who became a professional player at 9 years old, swept the Korean baduk league after returning home in 1972 from Japan, where he was studying, to complete his military service.

He won all domestic titles in 1980, 1982 and 1986, going on to win the 1st Ing Cup, an international baduk tournament, in 1989. His victory was a turning point for Go in Korea, and boosted the country’s status as a major force in the game.

Cho Chi-hoon topped Japan’s league after moving to the country at 6 years old. From 1980, he won the Meijin title - one of three major baduk titles in Japan - for five consecutive years. At the time, he pledged that he wouldn’t return to his home country without the title. In the 1990s, after earning the Meijin for another four consecutive years, Chi-hoon simultaneously won two of Japan’s other big baduk titles, the Kisei and the Honinbo.

But such great personal achievements between them also makes for a heated rivalry.

In their first confrontation in 1980, Cho Chi-hoon defeated Cho Hoon-hyun, as well as in next game in 1981.

The older Cho, however, won the next eight consecutive games. The last game between them was in 2003, when the younger Cho won.

“Now I think that was God’s will,” he said, “to encourage us to make a contribution by playing, one in each country.”

When asked about the upcoming game, Cho Hoon-hyun said he planned to enjoy it, particularly because it was part of the anniversary event.

For the modern game’s 70th anniversary, the KBA is also planning a retrospective, with the details still to be determined.

A photo exhibition will be held from June to November, while two baduk festivals are also in the works, one in September and the other currently planned for November.