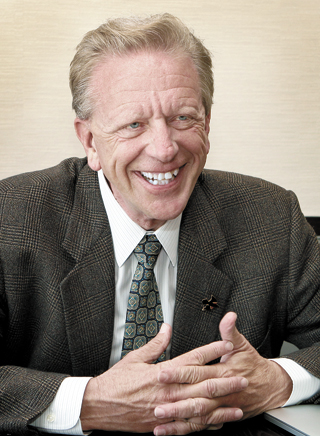 Paul M. Swiercz, a professor of management in the School of Business at George Washington University, talks about the launch of the Korean Management Institute that he will lead on the campus of the school in the U.S. capital. By Park Sang-moon

George Washington University, one of the first American colleges with a large Korean enrollment and an extensive alumni network, will establish the first institute dedicated to studying the management of Korean companies and share the results with American officials and entrepreneurs.

The university’s School of Business will announce the launch of the Korean Management Institute at its annual GW October Entrepreneurship Conference.

“The primary purpose of the institute will be to learn from the Korean experience,” Paul M. Swiercz, a mangement professor at the GW School of Business who has been named executive director of the institute, said in an interview May 24. “The country recovered from post-war devastation to become a world-class economy, and there must be lessons there.”

As an American researcher, Swiercz is intrigued by Korea’s development of its economic “ecosystem.”

“One of the things that most fascinates me is the unique business ecosystem that Korea has had to create from almost nothing,” he said. “One of the key elements in the system is the very gifted leaders who have a vision about the future. Also, there was the work force, and the critical role of education and the sacrifices of families to permit the high level of education.

“Another part of the ecosystem is the willingness of Koreans to work with and learn from other successful enterprises, such as the partnerships with Japanese companies, especially in sectors such as automobiles and electronics.”

Swiercz said the longtime ties between George Washington University and South Korea were an important influence on the university’s decision to start the institute.

“A factor for the establishment was the historical relationship between GW and Korea,” he said. “Many of our alumni were significant figures in Korea, such as the first South Korean president, Syngman Rhee. We also currently have a large community of Korean young people in our program.”

Lessons learned by defining the so-called “K-management” style can be shared with other emerging countries, he said.

“Korea, given its history, was able to make such rapid gains, to become such an important member of the larger economic community,” he said. “Other places can do this, too, such as Vietnam, Cambodia, Indonesia, South America and Africa. We want to be able to translate some of these experiences.”

Swiercz visited Seoul in May and June 2014 with several faculty members and GW students, and toured some headquarters of corporations, including CJ Group.

At the time, he found Korean companies also making efforts in “creating shared value (CSV)” a concept that grew out of corporate social responsiblity (CSR).

“A lot of businesses in Korea help solve or try to solve social issues,” he said. “It’s not that they just make donations or do charity, they are integrating it into their business. The U.S. is trying to figure this out.”

The institute will publish regular analytical reports featuring case studies of Korean companies, he said, as well as host a regular seminar, possibly every other month, in Washington, D.C., for U.S. officials, politicians, businesspeople and journalists interested in Korean entrepreneurship and economic development.

The content will be shared with students through Korean economy classes in the School of Business, according to the university.

It is the first time for a U.S. university to launch an institute focused on studying Korean management practices.

The idea of an on-campus institute was first discussed at the Inter-American Development Bank’s annual conference in Washington in May 2014, said institute adviser Kim Ki-chan, a business administration professor at Catholic University of Korea and president-elect of the International Council for Small Business.

“To launch such an organization in the United States, I have worked for the past three years,” said Kim. “In May 2014, the IDB meeting held a seminar titled Korea Experience to share the country’s know-how in economic development with policy makers and officials from South America. During the three-day seminar, South American officials showed strong interest in the Korean economy’s development and were eager to learn lessons from Korea. That triggered discussions on the need to launch an institute to study the Korean economy and entrepreneurship.”

“In the 1980s, everybody knew about Japanese management,” he said. “I saw that when a U.S. research institute released a report on the accomplishments of Toyota, it led many Americans to buy Toyota cars.

“It’s time for us to define what Korean management is. Defining K-management is one of the important roles for the institute in the future, just like promoting K-pop to foreigners.”