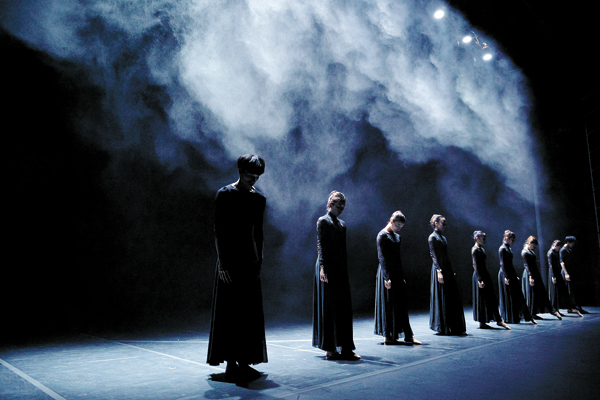 The Kim Yong Gul Dance Theater will stage the opening performance of the annual Ballet Festival Korea, “Inside of Life,” at 8 p.m. on Thursday at the Seoul Arts Center’s CJ Towol Theater, southern Seoul. Provided by the organizer

The annual Ballet Festival Korea has been bringing audiences to their feet every year since it launched in 2011. Now on its fifth edition, the monthlong festival is bringing 15 performances, including two that have never been seen before, to Seoul.

Kim In-sook, director of the festival’s organizing committee, recognizes that putting on just a couple of brand new shows may disappoint local ballet fans. “Funding limitations” are to blame, she says.

However, Kim argues that the number of new works should not be the absolute yardstick for success.

“It is just as important to stage revival productions of existing works in efforts to bring them to reasonable maturity,” she added during a press conference at the President Hotel in central Seoul last week. “I feel proud when I watch each performance get better and better year after year.”

It has been slow, but Kim said the local ballet circle has been making progress in creating additional productions and giving more opportunities to young Korean choreographers.

Through the festival, Kim hopes to expand the dance genre’s audience in Korea as well as develop a wider repertoire of pieces. To fit this objective, the event’s organizing committee selects entries each year through an open recruitment.

This year, 15 small and large ballet troupes in Korea, including the country’s major companies such as the Korean National Ballet and the Universal Ballet, will each present a piece starting from Thursday at the Seoul Arts Center in southern Seoul.

The pieces are chosen by evaluating the artistic value and quality of the work, the technique and how the work reflects issues of modern society.

The Kim Yong Gul Dance Theater will stage the opening performance of “Inside of Life,” a modern dance, under the guidance of Kim Yong-gul, the troupe’s choreographer.

“Just like last year, I feel dedicated to uplifting the atmosphere as the first performer in the opening ceremony,” said Kim.

At Jayu theater in the Seoul Arts Center, young choreographers will stage the two new works - “The Eyes from a Cage” by the Choi Jinsoo S Ballet Group and “Conatus” by the Goh Hyeonjeong Decent Ballet Company.

Three ballet companies - the Korean National Ballet, the Universal Ballet and the Seoul Ballet - will also be offering free outdoor performances every Saturday during the festival period.

Additionally, the Korean National Ballet will also stage its classical repertoire “Swan Lake” from June 24 to 28 at the Opera Theater.

Various events will be held during the monthlong festival, ranging from a class focusing on basic ballet moves led by Kim Ji-young, the principal dancer of the Korean National Ballet, to an outdoor flashmob and talks with choreographers.