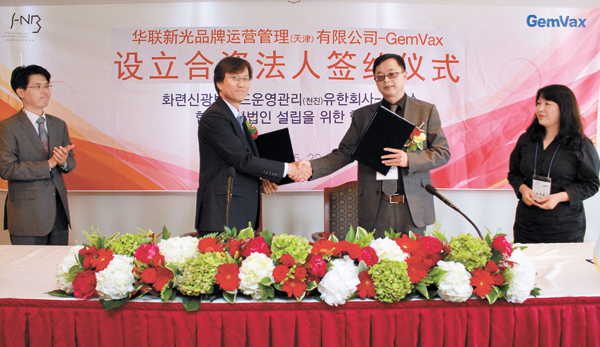 Kim Sang-jae, a co-CEO of GemVax & Kael, left, and Zhong Jiawei, vice chairman of Hualian Group, seal the deal for a joint venture on May 22 at the Seoul Club, central Seoul. Provided by Gemvax & Kael

Hualin Group, China’s state-controlled retail giant, will establish a joint venture with Korean company GemVax & Kael to import and sell a total of 30 billion yuan ($4.8 billion) worth of cosmetics and pharmaceutical products at its 86 department stores and 2,400 hypermarkets over the next three years.

Zhong Jiawei, vice chairman of Hualian Group, signed a contract with Kim Sang-jae, a co-CEO of GemVax & Kael, on May 22 at the Seoul Club in central Seoul.

The new venture will be known as Hualian GemVax, according to the two companies. Equal initial investments will be made by each company within three months. It is the first foreign joint venture for Hualian Group.

Asked why Hualian Group chose a Korean SME as its partner, Zhong said GemVax has a variety of biopharmaceutical products that are rapidly becoming popular in the Chinese domestic market, such as the world’s first vaccine for pancreatic cancer, code named GV1001.

Through the joint venture, GemVax & Kael will have the exclusive right to distribute other Korean companies’ products to Hualian Group’s stores, according to both companies.

“Hualian Group wanted to invest so much money in GemVax, that it could have bought the company outright,” said Kim, the co-CEO of GemVax & Kael, at the press briefing. “So I dissuaded the group from doing so and suggested that we establish a joint venture.”

Hualian Group thinks products from Samsung Pharmaceutical, which was recently acquired by GemVax & Kael, will be especially appealing to Chinese consumers.

Samsung Pharmaceutical, founded in 1929, is not related to Samsung Group, which started in 1938.

To ensure Korean authenticity, the joint venture will put an electronic label on all products.