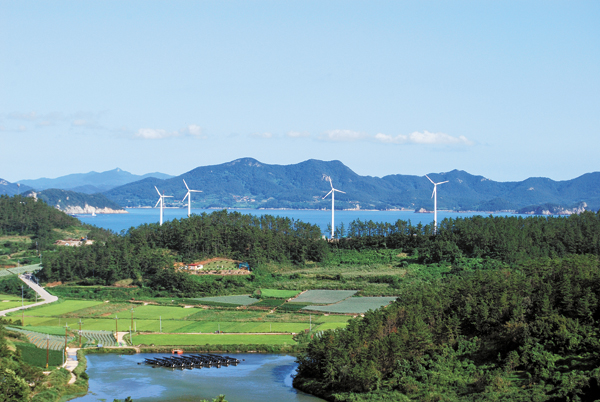 JINDO, South Jeolla - Tiny Gasa Island off the nation’s southwestern coast is perhaps best known for the special seaweed its residents export to Japan. But these days, it’s the wind turbines and solar panels making the island energy independent that are grabbing all the attention. 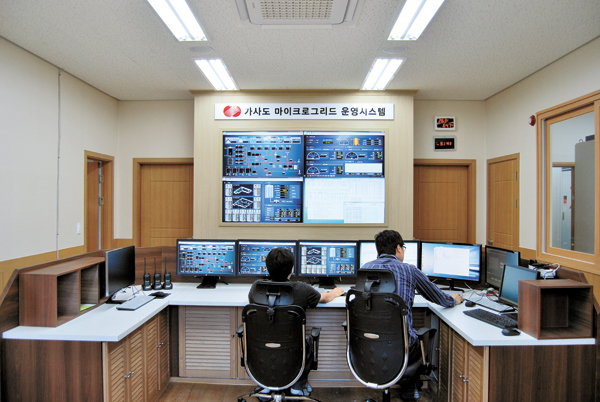 The fully automated energy management system at the Microgrid Monitoring Center on Gasa Island. The system tracks four solar power complexes, four wind turbines and three diesel power plants in order to monitor electricity production and storage status. Depending on the level of electricity being consumed, the EMS auto-controls the power supply. Surplus is automatically stored inside the electronic storage system batteries, and stored electricity is automatically spent in cases of power shortage. Provided by the company 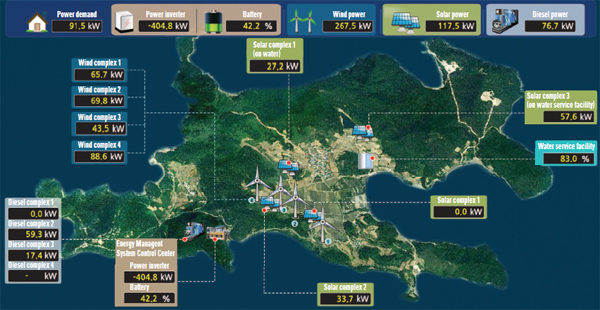 Before the microgrid facilities arrived, the island used to be entirely dependent on old and costly diesel power plants. In order to pay for power, the Jindo County government used to face an average operating loss of 700 million won ($629,000) every year.

But after Kepco came in last October, the small island has shaved 150 million won from its power bill over the past six months. 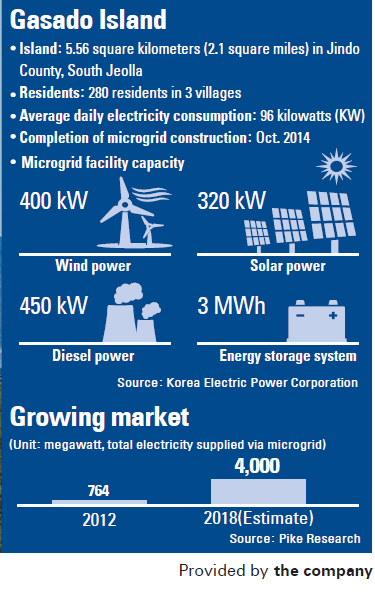 Residents have expressed satisfaction with the facilities, which give them enough electricity to turn on their air conditioners at home and build factories to process the seaweed and fresh produce collected on the island.

“In the past, fishermen here have had to export our seaweed for cheap because we didn’t have enough power to sustain a drying facility,” Kim Kye-seok, a civic leader on the island, told the Korea JoongAng Daily. “We’ve had to pay other fishermen on mainland Jindo to dry and package our seaweed and fishes to sell to our Japanese buyers.

“Thanks to the microgrid facility, we have a sustainable source of electricity. So, the residents are currently preparing documents to ask Jindo County and other financial institutions to open the factory.”

The ecofriendly system supplies 80 percent of the island’s total electricity, with 20 percent still coming from a diesel power plant to prevent bad weather from affecting power.

The microgrid project on Gasa Island is one of Kepco’s test-bed communities, which the corporation hopes can demonstrate the viability of its systems for use on far-away islands and in mountain villages.

So far, the government has worked with Kepco to transfer the system to 86 other islands around the peninsula.

Kepco spent 9.2 billion won on the Gasa Island project, but the company says it thinks small communities can build a system of similar size for just 4.2 billion won.

“Many critics pointed out that the clean energy management facilities are still too expensive, but we estimate that a small community would make back the 4.2 billion won investment in 16 years,” said Chae Woo-kyu, a researcher at the Microgrid R&D Center at Kepco’s Research Institute. “Early investment [in the microgrid system] is pricier than investing in diesel power right now, but it saves steadily on fuel and management costs while also providing electricity at a cheaper price.”

The Korean microgrid industry is estimated to produce up to 5.8 trillion won of electricity by 2030.

Kepco eventually aims to export its technologies to countries with low population densities like Canada, and to developing countries that want to invest in carbon-free power generation and sustainable development.

The company also signed a memorandum of understanding with Kuwait and Qatar, as well as Latin American countries like Colombia, Peru and Chile during the recent presidential visit, to pass along the microgrid technologies to state-run electricity companies in the regions.

According to industry analyst Pike Research last year, electricity generated from microgrids in Australia, China, India, Japan, Korea, Malaysia, Singapore, Indonesia and the Philippines is estimated to reach 597.3 megawatts in 2023, nearly 16 times larger than the 37 megawatts in 2013. Worldwide, microgrids are estimated to provide about 4,000 megawatts by 2018.

“Some developed nations, including Australia, Japan, Singapore and Korea, will pursue development and pilot projects in the next few years and then will deploy diverse applications, especially for industrial, institutional and communities’ utility uses,” the analyst’s report wrote.