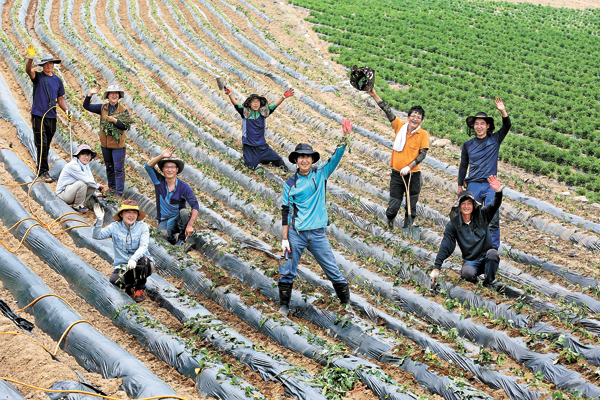 Workers in their 40s and 50s who turned to farming in Binari Village in Bonghwa County, North Gyeongsang, work on their land. By Gong Jeong-sik

They helped long-time locals establish a cooperative union, and since then the village has set out to sell its agricultural goods to larger markets in urban areas. The new settlers are mostly in their 40s and 50s and came to the village to start over as farmers, most leaving high-paying jobs to do so.

“I thought it would be much better to work as a farmer for the next 30 years, rather than an office worker for 10 years,” said Lee Se-ho, who formerly worked at a computer company.

The 43-year-old is just one of an increasing number of people in their 40s and 50s who have migrated to the country’s more remote areas in recent years to try their hand at agriculture. And for many, it is all part of planning for retirement.

Those who have turned to farming after retirement have grown year by year, though for a long time it was primarily a consideration for seniors in their 60s close to retiring.

But that is changing now as many from the younger generations turn their sights on the prospect.

As the average lifespan has gone up in Korea, planning for one’s golden years has become more complicated, with pensions and savings barely able to provide in old age.

As a result, older workers are forced to find new sources of income. It has also motivated middle-aged employees, who are just a decade away from retirement, to seek new options, with farming being one of them.

They do not wait for their retirement ceremony. Rather, once they are prepared, they simply move.

Kim Seong-hun, 48, an executive at a big company, is attending a class in order to make the transition to farming at an institute in Seoul run by the Korea Agency of Education, Promotion and Information Service in Food, Agriculture, Forestry and Fisheries (EPIS).

“Most people in my class were about as old as I am,” he said.

Sixty percent of the people attending courses at the institute currently have full-time jobs, and all the lectures scheduled in August were fully booked by early April. Data from the Ministry of Agriculture, Food and Rural Affairs shows that workers in their 50s made up 39.6 percent of the households that took to farming last year.

That was followed by workers in their 40s at 22.4 percent.

But setting out to work as a farmer requires a lot of preparation, as does moving to the countryside. According to a survey conducted by the Center for Food, Agricultural and Rural Policy with 701 new farmers, it took about 18 months on average to prepare to move.

During that period, aspiring farmers specified a plan. In the survey, 55.9 percent of the respondents answered that they had collected information for more than one year.

No Gwang-sik, 58, for example, has been preparing to work as a farmer since 2009. In doing so, he has consulted with experts on his plan and cultivated tomatoes and lettuce in his garden.

He added that he will move to Danyang County, North Chungcheong, within the year.

Despite doubts over income and quitting a stable position, many new farmers have managed to make good money ? some even earning as much as or more than their previous salaries.

Im Chae-seob, 51, who formerly worked as an executive at a major company in Seoul, and 47-year-old Geum Seung-won, a former financial analyst, moved to Gongju, South Chungcheong, to make time for themselves.

By cultivating raspberries and chestnuts and running a class discussing environmentally friendly meals, they earn about 100 million won ($89,928) annually.

This phenomenon has prompted many experts to urge the government to implement a policy to support aspiring farmers.

Likewise, authorities should increase investment for public services, like medics, culture and education in rural areas, according to Kim Jeong-seop, a researcher at the Korea Rural Economic Institute.

“To manage monthly expenses, a couple needs at least one person with a steady cash flow,” Kim said.

Chae Sang-heon, professor at Cheonan Yonam College, added that having a good relationship with locals was also key in successfully turning to farming. “Unless they can get along with local people in an area, their plan for farming will fail,” he said. 