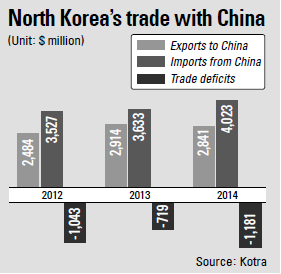 North Korea’s international trade volume reached $7.6 billion in 2014, rising by 3.7 percent year-on-year, according to a report on Friday by the Korea Trade-Investment Promotion Agency (Kotra).

The growth was backed by Pyongyang’s increased import of electronic devices and machinery and its rising export of clothing, according to the agency.

On the other hand, the reclusive state imported $4.5 billion worth of goods, up 7.8 percent. The widening disparity between imports and exports extended the North’s trade deficit by 41 percent to $1.3 billion.

China remained Pyongyang’s biggest trading partner in 2014, the report said, followed by Russia, India, Thailand and Bangladesh. Its trading volume with China increased to $6.9 billion, with imports from that nation accounting for $4 billion and exports $2.9 billion. The overall figure is a 4.9 percent increase from 2013, nudging up the North’s overall degree of dependence on foreign trade with China to 90.1 percent from 89.1 percent.

Hong Kong and Ukraine were no longer in the North’s top 10 trading partners, but Pakistan and Germany made their way onto the list. By contrast, Japan has not traded with the North since 2009, while the United States only provided it with aid and medical equipment.

Kotra noted that the North’s key export products include mineral resources such as coal and brown coal, which account for 37.2 percent of all its exports. Clothing and fisheries products were also among its major exports, with garment shipments recently seeing rapid growth.

Kotra expects that the North will continue to rely on its neighboring key ally going forward.

“2014 saw increasing dependence on China, while North Korea extended trade deficits due to the increase in imports and the decline in exports,” Kotra said in a statement. “When considering geopolitical factors and mutually beneficial trade structure, the North is expected to show further reliance on China.”

The Korea Development Institute, a state-run think tank, released its own report that paints dim prospects for the North’s exports.

The institute said the North’s exports of anthracite coal to China are expected to fall in the years to come due to China’s dwindling steel industry and stronger environmental regulations. Its exports of the coal to its ally have been considered the backbone of its economy, accounting for about 40 percent of its overall exports.

The report called on the North to reorganize its trade structure in order to avoid being seriously affected.

“The time has come for North Korea to reshape its external trade structure,” it noted.