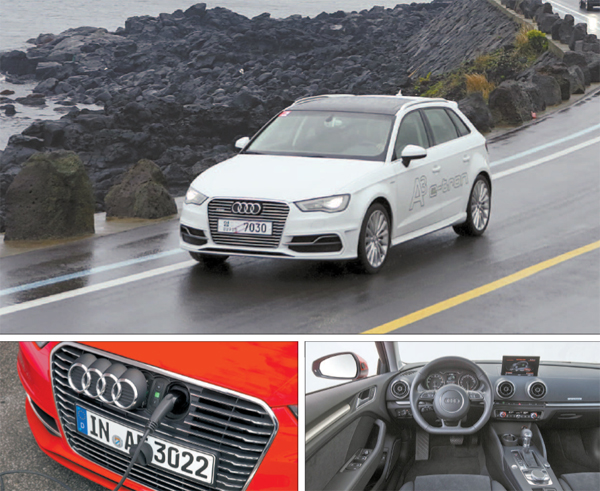 Top: The test drive for the A3 Sportback e-tron, a plug-in hybrid hatchback, on Jeju Island. Bottom: The interior design and the charging socket. Provided by the company

JEJU - Audi is recognized as a leader in high-end car technologies and it recently made a big step into the environmentally-friendly realm by introducing the A3 Sportback e-tron, the company’s first plug-in hybrid (PHEV) at the 2013 Los Angeles Motor Show. The company started selling the model in 2014 in Europe and will start selling it in Korea in the second half of this year.

Audi is revving up its PHEV lineup. The company unveiled its second PHEV Q7 e-tron Quattro SUV, the first model developed with a V6 TDI diesel engine and an all-time, all-wheel drive system Quattro, at the 2015 Geneva Motor Show. Then it introduced the new A6 L e-tron for China at April’s Shanghai Motor Show.

The company says it is working on developing a power train more advanced than the PHEV, possibly installing an electric motor or “e-tron” separately at the front and rear axles to support the internal combustion engine. The e-tron is on every Audi vehicle using electric motors and the company aims to develop e-tron models for its entire lineup by 2020. Along with its PHEVs, the company is also preparing to develop pure electric cars and LNG gas engine vehicles.

The A3 Sportback e-tron is a model that shows where the company is now technologically. The Korea JoongAng Daily got a chance to experience Audi’s PHEV technology on an 84-kilometer (52.19 mile) round trip course on Jeju Island stretching between the Pinx Golf Club and Haegeoreum (sunset) Observatory. 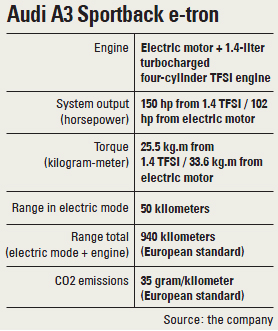 The exterior design of the A3 Sportback e-tron is similar to the A3 Sportback hatchback, but the body size has gotten a bit bigger and is now 4.31 meters long and 1.42 meters wide. The model is also equipped LED headlamps.

The electric charging socket is at the front grille. If you push aside the four-circle Audi logo, the socket appears. Using an industrial charger, the cars battery can be fully charged in two hours and 15 minutes. It will takes three hours and 45 minutes using home electricity on the German standard, and may be slightly different here.

The test drive focused on the car’s electric car mode (EV). Audi said the hatchback can travel up to 50 kilometers in EV mode, which is similar to other PHEV models. Driving in EV mode does not necessarily mean less power. The electric motor which provides responses quickly can accelerate up to 130 kilometers per hour. It also provides quieter driving.

When the driver reached the turn-around point after running about 40 kilometers, the gauge showed that the car could operate 4 kilometers more in EV mode. It seems EV mode can offer enough range for the average commuter. According to the company, Koreans’ average travel distance for commuting is less than 40 kilometers per day. Another good thing is that it does not cost any money at the pump. Driving this PHEV hatchback makes you feel like you are saving money.

The PHEV hatchback also operates in three other modes: hybrid auto, hybrid hold and hybrid charge. Hybrid auto automatically decides whether the vehicle should drive in either EV mode or to start using the engine. Audi’s 1.4-liter TFSI gasoline engine is considered one of the most advanced engines developed by the company. It provides 150 horsepower and 25.5 kilogram-meter of torque.

One question is how much of a subsidy will be given to PHEV hatchback buyers. The exact subsidy has not been determined yet, but the Ministry of Environment recently said about 5 to 6 million won ($4,445.05 to $5,334.06) of government subsidies will be given to each PHEV buyer, which is larger than the amount set for hybrid cars. The Toyota Prius hybrid, for instance, can receive 4.1 million won of government subsidies.

In order to receive the subsidy, a PHEV must use both the internal combustion engine and electric motor and be able to travel at least 30 kilometers in electric mode only. CO2 emissions must be less than 50 grams (1.76 ounces) per kilometer of operation.

The company has yet to disclose the price for the Korean market, but it is expected to be between 45 million won and 50 million won. The question is how young consumers in their 20s and 30s, the target group, will react to the price. For 50 million won, they could buy a premium sedan like the Hyundai Genesis, which is not as economically efficient as the A3 e-tron.

“We haven’t set our sales goal in Korea for this hatchback,” Jorg Dietzel, director of Marketing Communications of Audi Korea, told the Korea JooongAng Daily. “We are targeting the progressive and young generation and we expect the model’s high-tech features to attract them.”