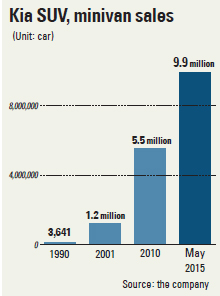 It’s been 16 years since Hyundai Motor Group took over the bankrupt Kia Motors and the company on Tuesday announced that cumulative sales of SUVs and minivans across the world have topped 10 million units.

The company said it sold 9.94 million SUVs and minivans through May and hit the 10 million mark on Friday. The amount accounts for about 30 percent of Kia’s total car sales (31.7 million) since it was founded 71 years ago.

SUVs and minivans led the revival of Kia Motors. Since Hyundai chief Chung Mong-koo acquired Kia in March 1999, he ordered it to focus on developing competitive SUVs and minivans while Hyundai Motor focused on sedans like the Grandeur and Sonata. Kia soon started turning itself around. Kia’s exports of the cars more than doubled from 48,398 units in 1998 to 111,935 the following year. Popular models in the early period were minivans such as the Carnival and Carens.

“In the early 2000s, Carnival and Carens accounted for 40 percent of the company’s entire sales,” said a spokesman of Kia Motors. “They certainly were the models that saved the company when it was in a financial hardship.”

Kia went bankrupt in 1998 in the depths of the Asian financial crisis, known as the IMF Crisis in Korea. But Hyundai Motor saved it. It shared research and development and car body platforms with Kia. The company also tried to reduce production costs while obtaining more advanced technologies. The company posted an operating loss of 2 trillion won ($1.8 billion) in 1998, but turned a profit the following year. In 2003, it made 800 billion won in operating profit.

The company hit a big speed bump - and went into the red - in 2006 due to an unstable exchange rate and shrinking domestic demand for SUVs and minivans. But Chung Eui-sun, who became, chairman of Kia Motors in 2005, turned it around. The son of the Hyundai Motor Group chairman improved car designs to target both the young generation and the international market.

“The thing consumers complained about Kia cars was that they couldn’t find much difference from Hyundai cars,” said a spokesman of Kia Motors. “Chung wanted Kia to be recognized as a more young and innovative brand and he thought design was the key.”

In August 2006, Chung appointed Peter Schreyer as Kia’s chief design officer, and developed a family look for Kia cars with a grille design known as “Tiger nose.” Eventually the company started attracting customers with newly designed Sorento and Sportage SUVs. The new Sorento that was introduced in the Korean market last August for instance won the prestigious iF Desgin Award in February.

With successful changes in design, the company sold 491,224 SUVs and minivans last year in the global market, and it expects to export 500,000 units this year. The all-time best-selling vehicle for Kia is the Sportage SUV with 3.61 million units sold, followed by the Sorento (2.3 million units) and Carnival minivan (1.57 million units).