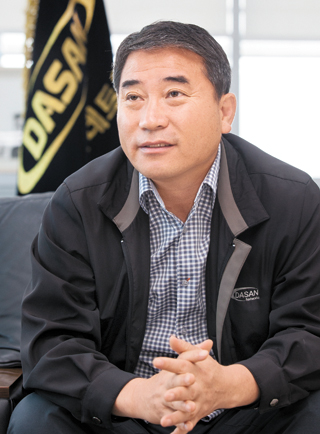 Dasan Networks is the biggest network equipment maker in Korea. Its CEO Nam Min-woo founded the company in 1993 after spending the early years of his career as an engineer at the now-defunct Daewoo Motors.

Following Dasan’s initial success supplying network equipment to Korea’s major telecommunications firms, including KT, the company was listed on the tech-heavy Kosdaq market in 2000. Along with its headquarters in Pangyo, Gyeonggi, where a lot of Korea’s technology firms nest, Dasan has offices in Japan, the United States, China, Taiwan and France.

Nam, a strong proponent of venture capitalism, has served as the chairman of the Korea Venture Business Association and worked with the Young Adults Association, a presidential task force aiming to improve the welfare of Korea’s youth.

The Korea JoongAng Daily sat down with Nam for a chat about Dasan and his view on youth unemployment, an issue the nation is currently facing.

Q. Due to the latest weakness in the Japanese yen and the technological advancement of Chinese companies, Korean IT businesses are facing an increasingly challenging environment. What are your thoughts on the current market and how is Dasan Networks dealing with this?

A. We have been competing with China for many years, so this is not new. In fact, China’s Huawei is probably the No. 1 player in the area of telecommunications equipment. A lot of engineers working for Chinese companies, including Huawei, are already in Silicon Valley soaking up the latest technologies and trends. The Japanese have traditionally been weak in telecommunications and IT, but the weaker yen has come as a life saver. We are seeing that our Japanese peers’ earnings are improving. In the environment we are in we cannot simply rely on a handful of Korean conglomerates to sustain the industry. We cannot foresee what will happen to these conglomerates - just look at Nokia. We need diversity for the survival of the local environment. I personally think that less than half of the top 50 conglomerates will manage to survive in the coming years. In order to survive, we need to do better than competing simply on pricing advantage. For our part, Dasan has outsourced manufacturing parts to firms abroad, and we are currently operating R&D centers in India, Vietnam and China. We are also working to diversify our clients. We have attained Japan’s Softbank, India’s BSNL and Japan’s NTT as our clients. Just last year we won Taiwan’s Chungwha Telecom and Vietnam’s Viettel. We are also confident that we will be able to supply equipment for Sprint in the U.S. We hope to secure more clients in developed countries, as profitability is higher there.

What can a Korean IT company do to better compete in the ever-crowded market?

There are reasons why Korea managed to retain its language and culture right next to bigger giants like China. I see similar characteristics in Vietnam as well. We are tenacious.

What I have noticed is that Chinese firms are very good at seeing the big picture and they think on a big scale. But on the other hand, they’re not very detail-oriented. We cannot compete with Chinese companies head on, but we can find niche areas where we can excel. We need to invest continuously in R&D and technology advancement and pioneer new markets overseas.

We also need to think about bringing in top talent from overseas. Last year we made investments that were equivalent to 17 percent of our annual sales, and we’re trying to maintain a pool of top-notch talent by hiring the right people in India, China and Vietnam. For cost efficiency, we have outsourced product manufacturing to overseas firms.

What should be the government’s role in increasing the competitiveness of local firms?

Efficient and smart allocation of budgets would be one. Things have improved now, but years back, the Korean government relentlessly slashed IT-related costs and treated IT manpower like unskilled laborers. This has negatively affected Korea’s software industry. We need deregulations to let corporations do their work without hurdles and give support to SMEs so that they can grow better.

Also, I think we need more stringent enforcement of rules and market ethics. We are not seeing active M&As among Korean venture capitals because bigger firms can more easily and cheaply steal or copy someone else’s ideas. Who would want to invest time and energy in innovations in such an environment? Local conglomerates may think Softbank’s Masayoshi Son was crazy to invest 1.1 trillion won ($1 billion) in Coupang.

But I deeply respect him. He paid a legitimate price for a very good idea - Coupang’s top-notch delivery system. We need to see more investments like this. We need to establish a culture where ideas and new technologies are given legitimate respect and protections by law. We have a long way to go, but we are seeing some positive changes happening, albeit slowly.

Rising unemployment among young adults is a big issue. You have served as the chairman of Korea Venture Business Association and the head of the Young Adults Association. Can you share your thoughts on this issue? What can the corporate sector do about it?

Bigger conglomerates simply have to hire more people. They need to hire 20,000 people if they need 10,000 people, and invest in educating them. Stop poaching talent from the midsize firms that invested a lot of resources to nurture that talent. We also need to establish a culture where failures are accepted and understood so that more young people feel encouraged to create start-up companies.

What can the government do?

There are some government programs that support start-up companies, but the scale of support is small. And government officials try to micromanage them. They need to leave these start-ups to do their work.

What would you say to young adults looking for jobs or looking to build a start-up?

If you see an opportunity, go for it. You could make mistakes, but that’s how you grow. Take chances. You can learn from your mistakes.

The most difficult time for me was in 2004, right before securing an investment from Siemens. Perseverance is one of my strengths, but in 2004 I thought Dasan would fail. I did everything I could, but nothing could alleviate the situation. Then Siemens came and rescued us with a $100 million investment. Fortunately for us, Siemens was looking to expand its network business at that time and needed the products we were making. So we agreed to be part of Siemens.