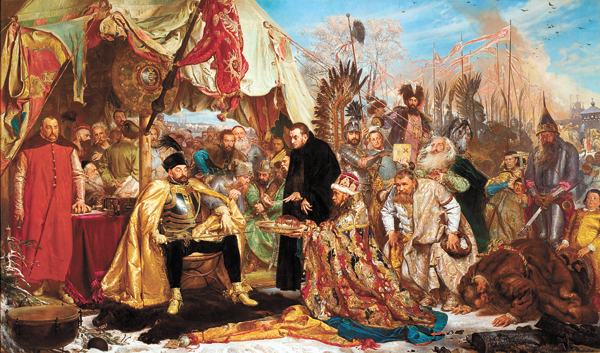 “Stefan Batory at Pskov” (1870-72) by Jan Matejko (1838-93) is one of many historical paintings on display at the “Polish Art: An Enduring Spirit” exhibition currently underway at the National Museum of Korea. Provided by the museum

Korea and Poland have one clear common denominator: The histories of both countries are marked by wars and invasions.

Poland’s past is evident in the “Polish Art: An Enduring Spirit” exhibition currently underway at the National Museum of Korea in Yongsan District, central Seoul. The 250 pieces on display from the Middle Ages to the 20th-century encapsulate the country’s 1,000-year history.

“Situated on the boundaries of eastern and western Europe, Poland attempted to protect its sovereign identity and culture despite its history marked by wars and invasions,” director Kim Young-na told reporters during a press view on June 4, while also pointing out that Korea has a similar past.

Since 2008, the museum has hosted a series of exhibitions highlighting some of the world’s best-known civilizations - such as Persia, Egypt, Turkey and the Maya - with director Kim’s belief that the better you know about the world, the better you get to know your own country. Earlier this year, the museum held an exhibition on glass art from the Czech Republic.

Whereas that exhibition was about the craftsmanship and detail of the pieces, the charm of the show on Poland appears to be the paintings’ sheer size, which is quite impressive.

“Stefan Batory at Pskov” (1870-72) by Jan Matejko (1838-93), for instance, is six meters (20 feet) wide and four meters high. The display wall for the painting, according to museum officials, is the highest the museum has ever constructed.

What is unique about Polish historical paintings is that they often merge different events or figures instead of portraying one specific occurrence, in order for viewers to see the bigger picture and understand the context and mechanisms of what happened at the time.

Looking for characteristics and symbols that convey an Eastern influence could add fun to the viewers’ experience at the exhibition.

“What’s interesting about portraits of Polish aristocrats is that many of them are in Oriental-style clothes,” curator Kim Woo-lim said.

This is understandable considering Poland’s history. Its expansion to the East led the country to adopt elements of certain civilizations, especially from Turkey, according to museum officials. The influence of Turkish culture is seen in Polish dress, weaponry and decorative arts.

To cater to Koreans, who tend to associate Poland with astronomer Nicolaus Copernicus (1473-1543) and composer Frederic Chopin (1810-49), there are sections for the two. An 1871 painting dedicated to Copernicus as well as the scripts for his book, “De Revolutionibus,” can be seen in a segment dedicated to the astronomer. In the section about Chopin, visitors can enjoy a handwritten musical score as well as a cast of Chopin’s left hand.

But visitors will learn that Poland has more to offer than these two illustrious figures.

The country’s medieval religious art is also impressive, as seen in the exhibition’s opening section, which is dedicated to it. It delves into how the history of the Polish state begins in 966 with the adoption of Christianity by the ruler Mieszko I. Art on display in this section includes the 15th-century sculpture “Madonna and Child” and 16th-century painting “Family of Mary.”


The exhibition runs until Aug. 30 at the Special Exhibition Gallery at the National Museum of Korea. Admission is 13,000 for adults ($11.62); 11,000 won for university students, middle and high school student students; 8,000 won for elementary school students. Opening hours are between 9 a.m. and 6 p.m. on weekdays, excluding Wednesdays but extend until 9 p.m. on Wednesdays and Saturdays to encourage nighttime viewing. Hours on Sundays and holidays are between 9 a.m. and 7 p.m. The venue is close to Ichon Station (lines No. 1 and 4), exit 2. For more information, call 2077-9000 or visit www.museum.go.kr.