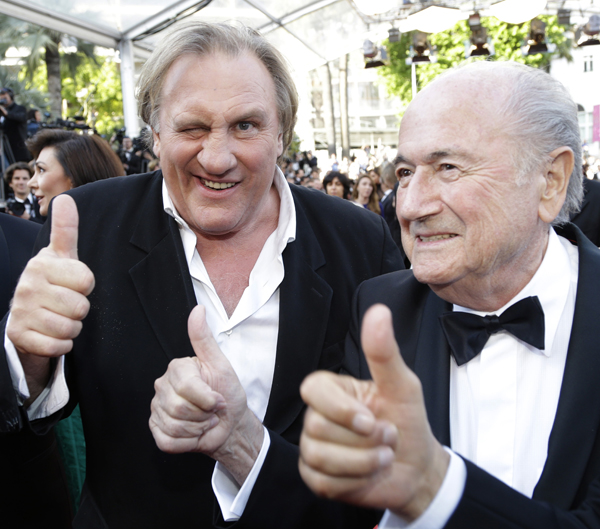 PARIS - Actor Gerard Depardieu personally intervened to persuade the Cannes Film Festival to show the FIFA-funded movie “United Passions’’ that sank almost without trace at the box office after being panned by critics.

In an Associated Press interview, Cannes director Thierry Fremaux said he initially rejected the movie, thinking it unworthy of the world-famous festival.

They agreed to let it be shown in the open air on a beach. That green light was enough to allow marketers to attach the prestigious Cannes name - its palm-leaf logo and the words “official selection, festival de Cannes’’ - to “United Passions’’ trailers and posters.

“Gerard Depardieu was very insistent. He really wanted us to show it,’’ said Fremaux, speaking Monday by telephone.

The French actor (“Green Card,’’ “Cyrano de Bergerac’’) has long ties with Cannes. In 1992, he presided over the jury that awards the festival’s coveted Palme d’Or prize. He also has ties with Russia, the next World Cup host in 2018. He accepted a Russian passport from President Vladimir Putin in 2013 after a falling out with France’s ruling Socialist government.

Fremaux attended the beach showing with FIFA President Sepp Blatter and Depardieu in 2014, after changing his initial position that the movie was unworthy of Cannes.

“I rejected the film. At the beginning, I said ‘Out of the question,’ because the film lacks the quality to be part of the official selection,’’ he told the AP. “Then they said, ‘Why not on the beach?’ I said, ‘Ah, the beach. Yes, it’s a festival. It’s football. It’s the general public. OK.’’’

FIFA did not pay Cannes to show the movie, Fremaux said.

The movie bombed on its release this month in the United States, taking only about $900 in an opening weekend at 10 theaters. In France, it went straight to DVD and was released in only a handful of other countries. According to box-office data firm Rentrak, it made only $178,639 in theaters before opening in the U.S., most of that in Russia.

FIFA largely bankrolled the $30-million movie about soccer’s governing body, the growth of its World Cup tournament and Blatter’s rise to power as FIFA president.

Played by Tim Roth (“Reservoir Dogs’’), Blatter is portrayed sympathetically in the movie as a hard worker who toiled to make FIFA financially successful and spoke out against corruption. In real life, FIFA is embroiled in U.S. and Swiss anti-corruption investigations and Blatter is on his way out with his 17-year presidency widely criticized.