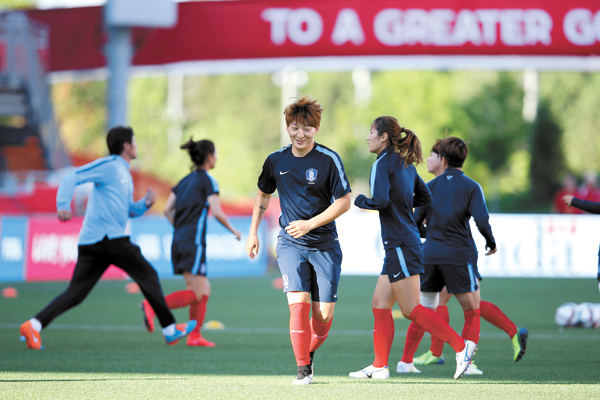 The women’s national team is looking to collect its first victory of the tournament against Spain and grab a ticket to the Round of 16.

Korea, ranked 18th in the world, currently sits last place in Group E after losing to Brazil and collecting a draw against Costa Rica. In order to reach the next stage, Korea must win against world No. 14 Spain.

This is the first time the two countries will clash at the senior level. The match will be held at Lansdowne Stadium in Ottawa, Canada, at 8 a.m. Thursday, Korean time.

For this do-or-die match, coach Yoon signaled that the team will start striker Park to boost offense. The 28-year-old hasn’t appeared in the last two matches against Brazil and Costa Rica.

“I have been watching Park’s condition closely,” Yoon said in a press conference. “I just had private conversation with her and I believe Park will do her job well. She will do fine even she plays as a starter.”

Park has not been at full condition after injuring both her ankles. After hurting her left ankle at the Cyprus Cup in March, she injured her right ankle during a league match with her Russian club WFC Rossiyanka last month.

The former Seoul City Hall women’s football team player has been wrapping her ankles and icing them while training. However, Yoon believes she will be able to play by the time the team finishes its final training on Wednesday for the Spain match.

Park, who is only one of two players on the squad that experienced the 2003 FIFA Women’s World Cup, is the team’s tallest player at 182 centimeters (6 feet) and one of its most lethal attackers, with 18 goals in 32 matches.

Park has also scored against Spain in the past, during the 2004 FIFA U-19 Women’s World Cup - though Korea still lost 2-1.

Yoon is hoping Park will partner well with the team’s star forward Ji So-yun and become an unstoppable offensive force.

In the last two matches, Korea made 25 shots but scored only two.

“Spain is better than us in terms of their physical condition,” he said. “We will have utilize strategies that break down our opponent’s strengths. We will challenge them with quick passes.”

Korea looked as though it would make history with its first World Cup win against Costa Rica on Sunday, but a goal in 89th minute tied the match and postponed Korea’s dream. Yoon said that players were disappointed after the draw, but now their faces have turned hopeful and bright.

“Their sweat and tears will not be in vain,” the 54-year-old coach said. “Players know my intentions and realize why we had to go through rigorous training, and why and need a victory.”

Yoon knows the match is also important for Spain, which leads Korea by a goal difference, as the victory would also earn them spot in the Round of 16.

In Group E, Brazil already has a guaranteed spot in the next round, while Costa Rica sits second with two draws. If Brazil beats or draws against Costa Rica and Korea beats Spain, the women’s team will advance in second place in Group E with one win, one draw and one loss.

If Korea beats Spain, but Costa Rica defeats Brazil, Korea will be third, but could still advance as a wild card.

In the FIFA Women’s World Cup, 24 teams are divided into six groups. The top two teams from each group are guaranteed a spot in the next round, and the top four third-placed teams can also advance to the Round of 16 depending on their record.