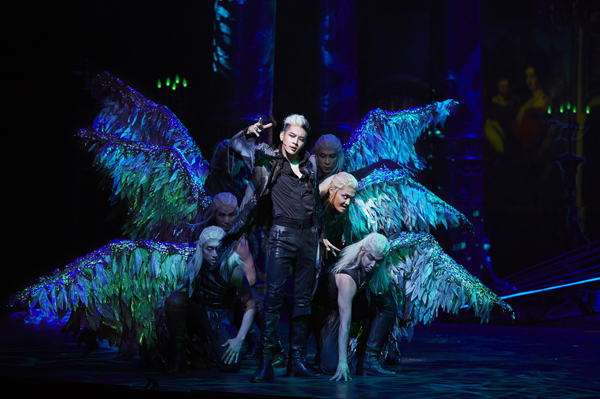 The Korean production of “Elisabeth,” featuring pop star Se7en playing Death, above, is being staged at the Blue Square in central Seoul. Provided by the organizer

To Sept. 6: “Elisabeth” is a musical fusion of fantasy and fiction based on the life of Elisabeth von Wittelsbach, the empress of Austria and queen of Hungary, from her marriage in 1854 to her murder in 1898. The show features Ock Ju-hyun, a former member of girl group Fin.K.L. who is now a musical actress.

To June 28: A Korean production of the rock musical by the legendary play-writing duo Andrew Lloyd Webber and Tim Rice, “Jesus Christ Superstar” is back two years since it wrapped. Musical actor Michael Lee will once again reprise the role of Jesus Christ, alternating with the star Park Eun-tae. Three actors, Choi Jae-rim, Han Ji-sang and Yoon Hyeong-ryeol, will alternate the role of Judas.

July 11 to Sep. 5: The Korean musical, “Arirang”, based on Cho Jung-rae’s epic historical novel loved by 10 million readers, is slated to be staged from July to September. The musical portrays the story of people suffering and struggling during the Japanese colonial rule. Seo Bum-suk and Ahn Jae-wook are double-cast as the main role, Song Su-ik.

To July 5: Written by Mitani Koki, considered to be one of the best comedy writers in Japan, the play is an adaptation of “Jekyll and Hyde.” Ever since the show was first staged in Korea on May 1 after premiering in Japan last year, starring Jung Woong-in, Choi Won-young, Shin Eui-jeong and Seo Hyun-chul, it has been praised by audiences for its well-organized plot, comical content and perfect performances,

Friday to July 19: After debuting in London’s West End in 1986, “Chess,” has become a legendary Broadway musical and is to be performed in for the first time in Asia. With a score by ABBA’s Benny Andersson and Bjorn Ulvaeus and lyrics by Tim Rice, the musical boasts a cast of famous K-pop singers and musical stars such as Jo Kwon, Key and Shin Seong-woo.

Saturday to Aug. 8: The U.S. tour of the legendary Broadway musical “Chicago,” which has attracted an audience of more than 2,200 million all over the world, is coming to Korea. The show has won six Tony Awards, including Best Musical Revival, two Olivier Awards, a Grammy for Best Musical Cast Recording, and thousands of standing ovations.

The Korean production of the show has been staged every year, but it will be the first time in 12 years for the U.S. production to be staged in Korea, featuring tunes such as “All That Jazz” and “Cell Block Tango.”