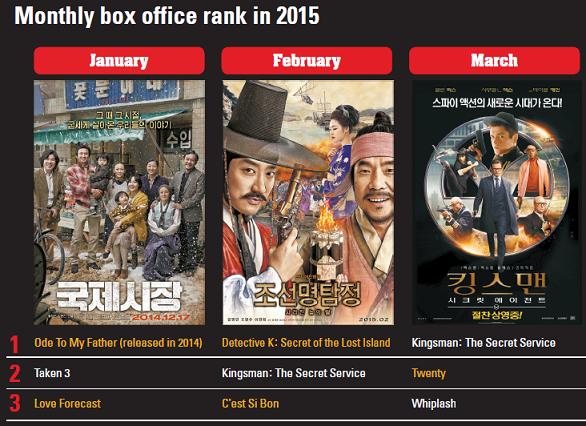 Just last year it seemed like the Korean film business had a rosy future ahead.

It was the third year in a row in which more than 100 million cinemagoers watched homegrown movies at theaters, driving the industry to generate its highest sales yet - 2 trillion won ($1.8 billion). 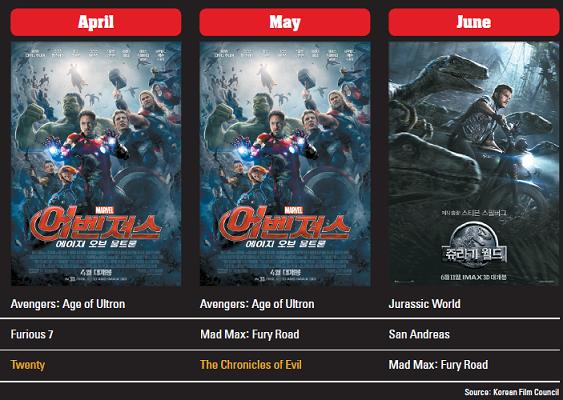 There were also some other record-breaking results.

But this is in stark contrast with 2015.

Among the Korean films that were released this year, only one - Kim Sok-yun’s comedy flick “Detective K: Secret of Lost Island” - was able to top the monthly box office chart, in February.

Since March, Hollywood features such as “Kingsman: The Secret Service,” followed by Marvel’s “Avengers: Age of Ultron” and “Jurassic World” have dominated at the box office.

According to the state-run Korean Film Council, only 31.5 percent of cinemagoers watched Korean films in May, while audiences were even lower, at 25.6 percent, in April.

So why are Korean films failing to ignite the domestic box office and succeeding like they did a decade ago?

Critics say the main reason is because the audience is increasingly tired of uninventive formats and plot lines.

“There is no stimulus in our film industry at the moment,” said film critic Kang Yoo-jung.

“There is no unique theme, idea or a provocative overturn in any way,” she added.

Her point is best represented by the streak of crime thrillers at local theaters since “The Chaser,” starring Ha Jung-woo, achieved unexpected success back in 2008.

The never-ending suspense and major twist at the end, which are the typical characteristics of the genre, seemed fresh to moviegoers at the time.

The movie attracted an audience of 5 million.

However, its success led to major film distributors in Korea indiscriminately churning out similar features. Critic Kang described the genre as a “saturated field with no hope for renewal” as a result.

Actor Kim Yun-seok, who stars in the upcoming crime thriller “The Classified File,” also expressed his woe about the situation at a recent press event. He said that dozens of identical scripts have been going around for the past 10 years. He joked that a detective role is a “character any middle-aged actor would have taken up at least once.”

The 47-year-old added that he picked his latest film because it tilted towards a human drama rather than a typical crime thriller.

Similarly, the costume drama is another overused genre that enjoyed its heyday when the “King And The Clown” (2005) and “Untold Scandal” (2003) enjoyed popularity more than a decade ago.

“There have been a number of ways the costume drama experimented in recent years after ‘King And The Clown,’ but the genre is rapidly becoming formulaic,” movie critic Kim Hyung-seok told the JoongAng Ilbo, an affiliate of the Korea JoongAng Daily, recently.

This year, Ahn Sang-hoon’s “Empire of Lust” and Min Kyu-dong’s “The Treacherous,” both of which take place in the Joseon Dynasty (1392-1910), opened early this year amid high expectations because of their star-studded casts and captivating new faces.

However, with the characters showing too much skin and the unnecessary violence on top of washed-up plot lines only turned the audience away, and both films received lukewarm responses.

“Empire of Lust” saw less than 500,000 admissions and “The Treacherous,” just surpassed the 1 million mark, falling far behind exceeding the break-even point.

It is not as though the industry lacked creativity from the get-go.

Back in the early 2000s budding filmmakers such as Bong Joon-ho and Park Chan-wook crafted movies that followed no conventional format whatsoever. The era was defined as the industry’s so-called renaissance when Bong’s “Memories of Murder” and Park’s “Old Boy” gained critical acclaim internationally.

The positive outlook for the market inevitably lured in more capital, leading to the establishment of film investment distribution companies, including major ones like Showbox and Lotte Entertainment.

However, the systematic and business-minded approach to motion pictures interfered with the directors’ artistic world. The market wanted movies that had mass appeal instead of unique ideas.

“Instead of diversity, investors and distributors alike want movies that will sell well and are nicely decorated with A-list actors and star directors,” an industry insider commented.

As a result, immature directors and small production companies, which rely heavily on investment from outer sources, have no choice but to conform to the market’s demand.

On the other hand, the audience’s taste in movies is becoming more diverse than ever.

One of the most surprising box office results in the first half of 2015 was spy thriller “Kingsman: The Secret Service” and music drama “Whiplash” sweeping the charts. These films did not contain the typical elements required to achieve box office success in Korea, nor well-known Hollywood actors. But because of their genre-breaking formats and stories, Korea became the second-largest market after the United States for both movies.

Korean films still have a shot this summer as there are a number of major movies such as Choi Dong-hoon’s period film “Assassination” and Ryoo Seung-wan’s crime thriller “Veteran” slated to open next month.

More down-to-earth or socially conscious films such as Im Sang-soo’s “Intimate Enemies” and Shin Su-won’s Cannes-invited feature “Madonna” are other choices at theaters from next week.

However, despite the many options, industry insiders say it is not going to be an easy fight because there are as many formidable mega-budget Hollywood features coming to Korea too.

Who will win the race to the top spot remains to be seen.

But it is clear that if the domestic movie industry wants to regain its once-hopeful prospects, filmmakers should continue to break boundaries, setting new standards for genres and themes.

Eventually, the Korean audience will no longer be fooled by lookalike films that follow the same formula with just a rotating cast of A-listers.