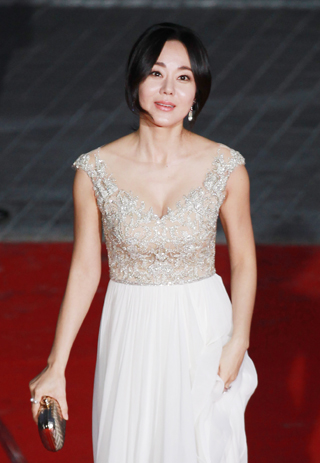 Internationally renowned Korean actress Kim Yun-jin returned to the small screen in the United States on Friday for season three of the U.S. drama series “Mistresses.”
“The ABC drama airs at 9 p.m., which is prime time,” the 41-year-old’s talent agency, Zion Entertainment, said in a press release on Friday.
The TV drama started its first season in July 2013 and has garnered a following throughout America.
ABC broadcasting company is actively promoting “Mistresses” and the company has even pointed to the drama as its representative work.
Until last year, the shooting for the episodes took place in Los Angeles. For the new season, however, the location changed to Vancouver, showing its viewers a new background.
The drama has been sold to 50 countries, including Korea.
Since her debut in 1996 through the Korean drama series “Splendid Holiday,” Kim has starred in various Korean and American dramas and films.
A few of her hits include Korean movies “Ode to My Father” (2014), “The Neighbor” (2012) and “Harmony” (2010). Other than “Mistresses,” the actress also took part in the popular U.S. drama “Lost” (2004-10).