Ikea accused of price gouging Koreans all over again

Ikea accused of price gouging Koreans all over again 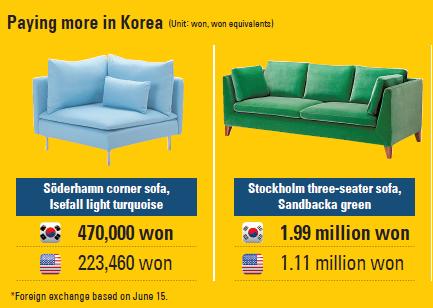 The Swedish retailer Ikea is once again under fire for its prices in Korea, which, according to one study, are 15 to 20 percent more expensive than in the U.S., Germany and even in Japan.

The nonprofit consumer agency Consumer Research Monday released a study that found that nearly 80 percent of the 126 products sold at Ikea’s premier store in Korea in Gwangmyeong, Gyeonggi, were more expensive than the same products sold in the three countries, and some were more than double.

Consumer Research said the Soderhamn Isefall light turquoise corner section sofa’s Korean price tag is 470,000 won ($428). This is more than twice the price for the same sofa sold in the United States, which was the equivalent of 223,460 won. In Germany the sofa sells for the equivalent of 376,620 won and in Japan for the equivalent of 407,048 won. The consumer research agency used exchange rates from June 15.

Additionally a three-seater Stockholm sofa Sandbacka green was also more expensive than in the U.S., Germany and Japan. In Korea, the sofa is being sold for just below 2 million won, but in the case of the U.S. it costs the equivalent of 1.1 million won. 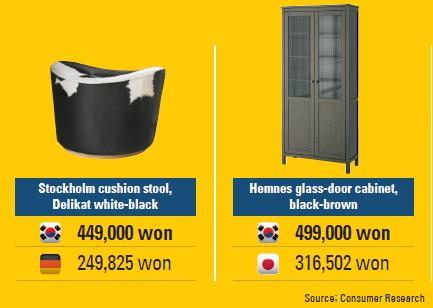 The more expensive the product was the larger the difference with the other three countries.

However, the report noted low end products with price tags less than 100,000 won were cheaper in Korea than in the other three countries.

“We have evidence that Ikea continues to maintain a high-price policy here in Korea despite the fact that the won has been appreciating against the U.S. dollar,” said a Consumer Research official.

Ikea Korea said it regretted that only Ikea has been targeted in the study and there was no comparison of its price and prices of similar goods offered by companies in Korea. It said its prices are based on many factors like market analysis, consumer surveys, customs taxes, logistics systems and foreign exchange fluctuations.

This is not the first time that Ikea has been accused of ripping Koreans off since it first opened its first store last December.

Even before the store opened it was accused of planning to sell products more expensively than elsewhere. In March, the Consumers Union of Korea released a similar study of its prices.

But Ikea continues to expand in Korea.

Ikea is currently working on its second branch in Goyang, Gyeonggi, which is directly across the Han River from the branch in Gwangmyeong. The targeted opening date is said to be in July 2017. The second branch will be smaller than the Gwangmyeong branch, which is the world’s largest Ikea store covering a 59,000 square-meter (635,071 square-foot) area. However, it will still be much larger than stores in many other countries covering an area of 51,297 square meters.

In addition to the second branch, three additional stores are planned to open before 2020. The Swedish retailer is in the process of purchasing a lot for its third branch in Gangdong District, southeastern Seoul, and reviewing plans for two additional branches outside the greater Seoul area. Sejeong City and Busan are considered potential candidates.