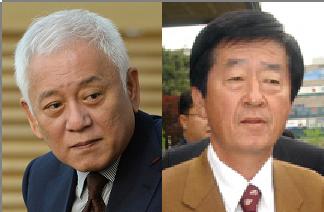 The prosecutors’ move against the three came after it questioned South Gyeongsang Governor Hong Joon-pyo, Former Prime Minister Lee Wan-koo and Saenuri lawmaker Hong Moon-jong in connection with allegations that the three received illicit funds from Sung, the chairman of Keangnam Enterprises who committed suicide after accusing a slew of highly-placed people of taking payoffs.

The businessman and former politician was found hanging from a tree on Mount Bukhan on April 9 with a note in his trouser pocket listing the names of eight influential men, next to what appeared to be monetary sums he is alleged to have paid to some of them. The list included current and former presidential chiefs of staff as well as former Prime Minister Lee.

Prosecutors suspect that Rho helped the late businessman win a special presidential pardon at the end of his brother’s term in late 2007 using his influence. The investigators are also trying to determine whether the former president’s brother also worked to win Sung another pardon in May 2005.

Prosecutors obtained testimony from a former executive at Keangnam Enterprises, surnamed Kim, that he had asked Roh to help swing Sung’s pardon. Investigators are focusing on whether Roh, who was mired in a number of graft scandals in the past and put behind bars for two and a half years on a corruption charge in 2008, pocketed bribes from the late Sung.

It is expected that Roh will appear before prosecutors in the coming days to be questioned.

On the former chairman of the New Politics Alliance for Democracy (NPAD), prosecutors suspect Sung paid for a Chuseok holiday trip to Hanoi, Vietnam’s capital, for Kim Han-gill and his family. Kim also faces the allegation that he took tens of millions of won from Sung when he ran for the opposition party’s top position in May 2013. Kim, who called the allegations “groundless,” is expected to answer the summons this week.

Prosecutors also notified six-term-lawmaker Rhee to come for questioning over allegations that he had received $20 million won ($18,100) in illicit funds from Sung during his run for the National Assembly in 2012, a charge Rhee has denied. The NPAD has complained that prosecutors are targeting people not on Sung’s list in a bid to divert public attention away from the eight men named on the list.

Of the eight people found on the list, prosecutors called in three ? Hong and Lee, and Hong Moon-jong ? for questioning and had the remaining five submit documents instead, sparking suspicions that the prosecutors are selectively investigating people close to the Park Geun-hye administration.

Of the eight men, it is widely anticipated that prosecutors will indict Gov. Hong Joon-pyo and former Prime Minister Lee without physical detention for violation of the political donations law, while dropping graft allegations for the other six.