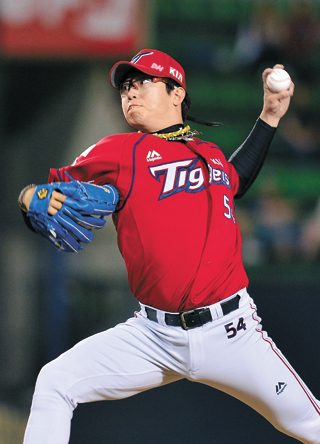 For Kia Tigers starting pitcher Yang Hyeong-jong, his best season may be yet to come.

Five years ago, the 27-year-old southpaw was considered a member of the elite lefty troika in the Korea Baseball Organization (KBO) along with Ryu Hyun-jin, who is now with the Los Angeles Dodgers, and Kim Kwang-hyun of the SK Wyverns. Hampered by injuries, however, Yang performed below expectations from 2011 to 2013.

Then last year, the Gwangju-born Yang went 16-8 with a 4.25 ERA to win the inaugural Choi Dong-won Award given to the season’s top Korean pitcher.

And he helped Korea win the gold medal at the Incheon Asian Games.

Q. You are pitching very well this season. What’s the reason?

A. I think because we have a good strategy. Before the game, I talk with catcher Lee Sung-woo. Against some teams, you can get more strikeouts, while with others you need to get grounders or flies. Depending on the opponent’s characteristics, I study whether I should go for power pitching or mainly use breaking balls. It could be called a customized strategy. Help from our analysis team and Lee Sung-woo is immense. I just trust Lee’s lead.

There are a lot of expectations after your great performance so far.

I read some articles these days and to tell the truth, it’s a little bit of pressure. I saw a story one day that compared me with former manager Sun Dong-yol, but I’m far behind him. I’m also way behind those in Major League Baseball. I want to be evaluated after I finish the season with a good result.

In the past, you frequently had “shadow pitching” - a drill in which a pitcher would go through his full motion without the ball - even after the game. Are you doing the same thing these days?

Shadow pitching is a way to find the right balance. This year, I don’t do it frequently. Instead, I’m focusing on exercises that can strengthen my left shoulder. My shoulder hasn’t always been good, but this year it’s fine.

When Sun Dong-yol was the Tigers manager, he wanted you to throw at least 3,000 pitches in the bullpen during spring training. But this year, you didn’t do that much warm-up pitching. Why?

I have always been good in the spring, but got tired in the summer. So I decided to make some changes. I tried to reduce number of pitches during spring training camp and adjust my pace in order to peak during the summer. I got permission from coaches Lee Dae-jin and Hong Woo-tae. So far, so good.

Until last year, you had the image of being a power pitcher who would throw a fastball even on an 0-2 count. But this year, you often use breaking balls after getting two strikes.

Batters know that I throw a lot of fastballs. I thought it might be good to make some adjustments if they are sitting on the fastball. In addition, many fastballs are fouled off, which makes me throw more pitches.

Does that mean you’ve made big changes to your pitching style?

No. I just changed little. I’m not a pitcher who has good control. I just tried to reduce the number of pitches I was throwing.

This year, you’re averaging 106.5 pitches per game, which is the second highest in the league. Do you feel pressure about it?

I’m a pitcher who throws a lot of balls, rather than strikes. So compared to pitchers with good control, it’s inevitable the number of pitches is rising. In the end, I should overcome that by exercising my left shoulder regularly, just like I’m doing these days.

Do you realize you are the ace of the team?

I still lack lot of things. But manger Kim Ki-tae and coaches Cho Kye-hyun and Lee Dae-jin give lots of good advice. They emphasize responsibility on the mound.

There is an impression that you have become more serious on the mound.

When I see Major League Baseball, I’m impressed that pitchers maintain poker faces on the mound. I think our league has lot of pitchers who have unnecessary facial expressions and behavior. As a pitcher, I don’t see those things positively. So that’s why I try to control my expressions.

Last year, the Texas Rangers reportedly offered $1.5 million on your posting, but the Tigers rejected the bid. Do you feel sad about it?

I don’t want to talk about what’s happened in the past. But as I work harder, I believe there will be an opportunity next year and perhaps the year after that. I think the opportunity eventually will come, but for now I just focus on pitching my best every start.