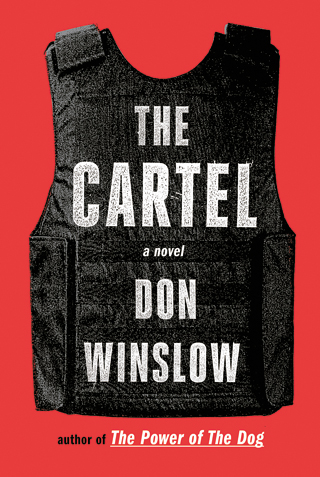 The cover of Don Winslow’s “The Cartel,” provided by courtesy of Alfred A. Knopf. [AP/NEWSIS]

Don Winslow is obsessed, and he knows it.

The 61-year-old Winslow, bald and dark-eyed with a deliberate, focused speaking style, has become an unintentional expert on a subject that sickens him. Admittedly prone to “rant” once he gets started, he will invoke everything from philosophy books to World War II as he explains the long history of drugs in this hemisphere and how the U.S. got caught up in a conflict it doesn’t know how to stop.

In 2005, he published the 500-page “The Power of the Dog,” his brutal and acclaimed saga about the drug war and rare honest man trying to end it - a maverick DEA agent named Art Keller. Convinced, like Keller, the story was told, Winslow moved on to other projects, including Oliver Stone’s adaptation of his novel “Savages.” But he never stopped focusing on the latest in Mexico and was horrified as the casualties and the cruelties only accumulated. More than 100,000 people have been killed because of the wars among the drug cartels, according to some studies.

“I started reading again and watching again and talking to people, and I think for probably a year or more, denying to myself and everybody else that I was going to do that book,” he says. “The more I read the angrier I got.”

Blurbed by James Ellroy as the “’War and Peace’ of dope war books,” the 600-page “The Cartel,” like “Power of the Dog,” is an intricately detailed narrative of the cartel life - where they live, the cars they drive, the clothes they wear. Winslow’s editor, Alfred A. Knopf, and publisher Sonny Mehta, said at times the author seemed so immersed in the world of his book he worried that Winslow might have “crossed some lines” and endangered himself.

Winslow’s research included talking to former government agents and sources connected enough to the cartels to know how they work, providing that they’re willing to say how the cartels work.

The author of more than a dozen books, Winslow has been a student of crime since growing up in the Rhode Island village of Perryville, when rival gangs from Boston and Providence fought. Hell’s Kitchen, the midtown Manhattan neighborhood that once well earned its nickname, brings its own history.

He was a private investigator and security officer in New York in the ’70s and ’80s and sets part of “The Power of the Dog” in Hell’s Kitchen. He has memories of convincing a German tourist that it might not be a good idea to photograph a crack deal, and of being startled by gunshots late at night while depositing a movie theater’s money in a bank, only to realize that it was July 4 and he was hearing fireworks.

The drug war is local news for Winslow, who with his wife, Jean, lives in a rural Southern California community close enough to Mexico to see Border Patrol agents race across his property. He decided to write “Power of the Dog” after reading a newspaper article describing the murder of 19 people, lined up against a wall and machine-gunned, in a Mexican town he had visited.

“Before that, I had never been interested in the war on drugs, or the drug trade,” Winslow says.

Keller notes that violence in Mexico seems to have subsided in the past few years, but worries about a recent increase in shootings in Tijuana. Perhaps Keller will have to return and take on the drug lords one more time?

“He’s not coming back,” Winslow says.