As growth slows, stimulus can hardly be avoided

As growth slows, stimulus can hardly be avoided 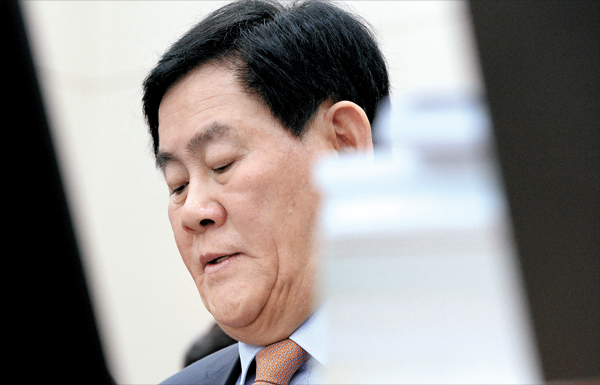 Asupplementary budget of at least 22 trillion won ($19.8 billion) is needed to overcome the effect of Middle East respiratory syndrome (MERS) on the economy and keep growth above 3 percent.

This was what Hyundai Research Institute proposed on Sunday.

“The economy, which has been on a recovery path since the second quarter of 2013, has been stuck in a soft patch due to the impact of the Sewol ferry tragedy in the second quarter of 2014,” said Hong Joon-pyo, a researcher at HRI. “But there are now growing concerns over a double dip as that factor is overlapping with the ‘fiscal cliff’ caused by the tax shortfall, a rapid decline in exports and the MERS scare.

“Economic stagnation is being realized.”

Korea is now only a week away from closing its first half and it has become universally accepted in the market that the Korean economy is faced with its biggest challenge since the 2008 global financial crisis and will have trouble keeping growth above 3 percent this year. The Finance Ministry in December projected this year’s growth to be 3.8 percent.

Fear of the virus’s spread has visibly simmered down from the first two weeks of June, as the number of people being infected has shrunk to fewer than five a day. Lives are returning to normal and public venues like shopping malls that were almost abandoned are seeing customers return, although not as much as before the outbreak.

Yet the damage the virus scare has wreaked on the domestic economy is considered to be even deeper than that of the Sewol ferry tragedy in April 2014. The sinking claimed the lives of 300 passengers on board and caused the economy to sag as the entire nation mourned their deaths and tightened its purse strings as a result.

According to HRI, the ferry tragedy lowered GDP by 0.2 percentage point. It’s said that the local economy in Ansan, where most of the students who died on the ferry came from, continues to struggle a year after the tragedy.

A survey by the Small and Medium Business Administration, Korea Federation of SMEs, and Small Enterprise and Market Service released last week showed that many small businesses think the MERS scare is having a heavier impact on the economy than the Sewol tragedy.

Various institutions, including state-run institutes, have been lowering their economic outlooks, although most are still in the upper 2 percent range.

The Korea Institute for Industrial Economics & Trade (KIET) was the latest state-run think tank to lower its projection for this year’s growth.

On Monday, KIET lowered its growth outlook for the year from 3.3 percent to 2.8 percent. Other state-run think tanks have made similar moves, including the Korea Institute of Finance, which lowered its outlook from 3.7 percent to 2.8 percent. The two think tanks cited the larger-than-expected impact of MERS on top of shrinking exports as the main reasons for the revisions.

The Bank of Korea and Korea Development Institute lowered their outlooks in April and May, but that was mostly due to struggling exports. The central bank and KDI have hinted they also may lower their projections for this year’s growth to below 3 percent due to MERS.

Private institutes are less optimistic than state-run think tanks and many expect economic growth to be 2.7 percent. Hana Institute of Finance was the latest, as it lowered its outlook Wednesday from 3.1 percent to 2.7 percent. BNP Paribas also projected the economy to post 2.7 percent growth.

Noting the rapidly deteriorating domestic market, the Bank of Korea made an unexpected turn in monetary policy. While 70 percent of bond experts surveyed by the Korea Financial Investment Association bet that central bank Gov. Lee Ju-yeol would freeze the key interest rate at 1.75 percent this month, Lee lowered the rate to another all-time low of 1.5 percent.

“Exports have been more sluggish than we expected and consumer spending, a key factor for [economic] recovery, has been impacted negatively,” said Lee, referring to MERS during a press conference held June 11 after the monetary policy committee lowered the benchmark rate. “The downside risk has grown and the biggest factor [at this juncture] is MERS.” 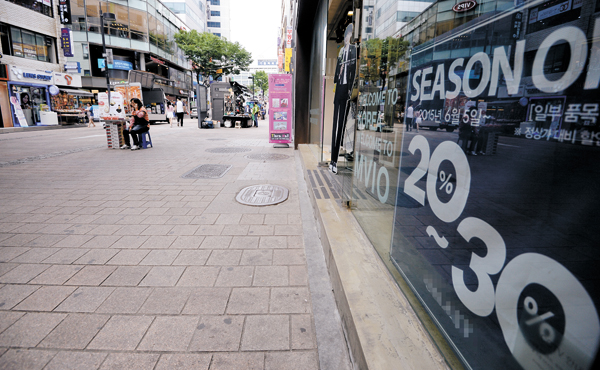 The streets of Myeongdong in central Seoul last Friday as were empty as people normally crowded public places because of MERS. [NEWSIS]

A few days later, he went on to hint at the possibility of yet another rate cut if the economy fails to pick up.

“It’s difficult to be optimistic over the Korean economic recovery, and therefore we will maintain a loose monetary policy,” said Lee the following day during a keynote speech in celebration of the bank’s 65th anniversary.

The rate cut was a sign by the central bank that the ball is now in the central government’s court to make a decision on propping up the deteriorating economy.

In a press release, the government quickly denied such claims, saying that although it was closely monitoring the effect of the MERS virus on the economy, it had not made any decision regarding policy direction for the second half of the year.

Although the Finance Ministry continues to remain cautious about the supplementary budget issue, it has clearly given in to the idea.

The first indication of a change in position was when Finance Minister Choi Kyung-hwan, hinted at the use of a supplementary budget while the National Assembly on Monday.

“If it is necessary, it would be best to allocate a supplementary budget swiftly, but the final decision will be made by the end of June after monitoring the economic situation,” Choi told lawmakers. “There are a lot of downward risks, including the MERS situation. We are looking at economic growth to be in the low 3 percent range.”

The government seems to be reluctantly considering spending 15 trillion won.

According to a Eugene Investment & Securities report on Tuesday, the economy grows 0.4 percentage point on average when a supplementary budget is used. If that holds true this year, it could bring the country’s economic growth into the 3 percent range. The study noted that since the nation was faced with its first biggest economic crisis in 1998, there have been 12 years in which the government used supplementary budgets. It said whenever the government spent an additional budget of 10 trillion won, 4.98 trillion won was added to the gross domestic product (GDP) figure.

In 2009, the Lee Myung-bak administration announced the nation’s biggest supplementary budget of 28.4 trillion won to cushion the blow of the global financial crisis that started with the bankruptcy of Lehman Brothers in September 2008.

Although that year the economy only succeeded in growing 0.7 percent from the previous year, experts say the economy could have recorded negative growth if not for the supplementary budget.

In 2013, the Park Geun-hye administration relied on a 17.3 trillion won supplementary budget that helped boost growth by 0.6 percentage point to 2.9 percent. The brokerage firm report noted that the supplementary budget contributed 22 percent of economic growth that year.

“The domestic economy, including consumer spending and investment in the construction industry, undoubtedly makes a substantial contribution to overall economic growth, but there is a limit,” said Kim Young-joon, a researcher at the Hana Institute of Finance.

Kim projected that due to low crude oil prices and interest rates, consumer spending will improve and construction industry investment will go up thanks to a solid recovery of the housing market in the second half. However, he said struggling exports resulting from sluggish growth in China and other emerging markets and the weaker Japanese yen will have a substantial negative affect on growth.

“The continuing yen depreciation is a huge threat to the nation’s economy,” said an executive at a major exporting company who requested anonymity. “Up until now, we were able to withstand the weakened yen, but we are now at a breaking point.

“The real problem is not whether conglomerates will be able to withstand the next couple of years, but if this situation is not addressed more assertively, many small companies will go out of business and then you’ll have a real problem on your hands.”

According to a survey by the Institute for International Trade in May, 54.1 percent of the 307 exporters, including 41 conglomerates, said their profitability was getting worse due to the ongoing depreciation of the yen and 57.7 percent said they expected exports to shrink compared to their initial target.

About 18.6 percent said they expect their exports will drop by at least 10 percent this year.