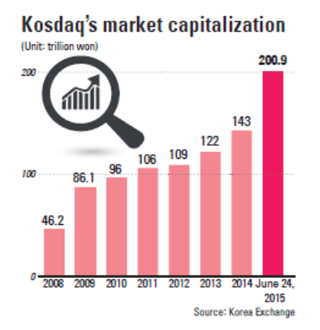 Korea’s small-cap Kosdaq keeps getting hotter, approaching a record high thanks to a boost in American tech stocks and the local popularity of small to mid-cap stocks.

According to the Korea Exchange on Wednesday, the Kosdaq rose 0.92 percent to close at 746.62 points, climbing for the seventh straight trading day.

Expectations among investors are rising that the Kosdaq will break its record high of 751.57 points, set in December 2007.

The Kosdaq has been at full steam this month, exceeding 720 points on June 9 and 730 points on Monday.

Compared to the beginning of the year, the market index has risen by 37.5 percent.

Some analysts are debating whether the small-cap trend is sustainable, or the product of temporary investment strategies. The Kosdaq market mostly consists of individual investors, accounting for 87 percent of the total.

Most analysts say the Kosdaq will continue to expand, considering that the U.S. Nasdaq index also reached a record high, but some claim there is no further momentum to keep the market climbing.

One reason analysts are optimistic about the future of the Kosdaq is the Nasdaq index that, like the Kosdaq, mostly consists of technology-related shares. The Nasdaq closed at 5,153.97 points on Monday local time, beating the index’s record of 5,132 in March 2000 during the dot-com bubble.

“The Kosdaq started to rise in 1999 during the Internet bubble, about three years later than the Nasdaq did,” said Lee Eun-taek, an analyst at SK Securities. “The Nasdaq index has risen since 2012, and the Kosdaq has started this year due to the local economy’s slowdown. The uptrend of technology stocks will remain for the next two to three years.”

But not all analysts are so optimistic about the index’s ability to keep climbing.

“The Kosdaq is showing a similar trend as in 2007, when it dropped after reaching its record’s high,” said Choi Dong-hwan, a researcher at Shinhan Investment & Securities.

He explained the index may fall after the Fed raises its interest rate.

Kang Hyun-chul, director of investment strategy at NH Investment & Securities, was negative about the future. He said about half of Kosdaq-listed companies are constantly seeing operating losses, and the recent climb came from future growth potential, not actual corporate fundamentals or strong performances.