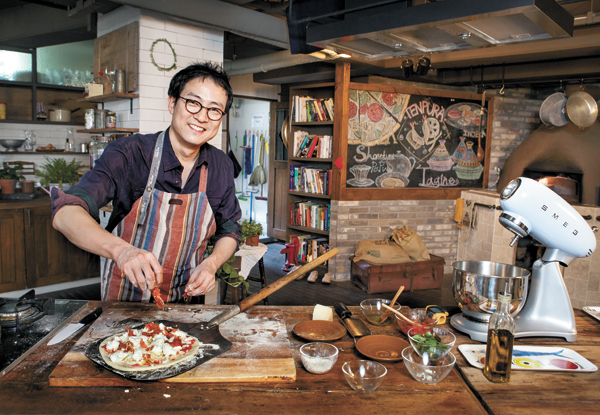 Producer Lee Wook-jung cooks an Italian pizza for “Wook’s Food Odyssey” at his studio in Sangsu-dong. By Park Sang-moon

For Lee Wook-jung, food is much more than daily meals served for nutritional purposes.

For him, food is a way of navigating the world by finding the stories hidden behind each country’s distinctive cuisines.

He believes that the history of civilization, as discovered through local dishes, speaks more than a thousand words about a country’s culture and history.

Lee, the producer of the Peabody Award and Korea Broadcasting Award-winning “Noodle Road” (2008), wears many other hats. He is a documentary producer, a chef and a writer.

Above all, Lee says he wants to introduce himself as a “producer who tells various stories related to food.”

Lee, who studied English Literature for his bachelor’s degree and Cultural Anthropology for his master’s, is definitely a trailblazer on Korea’s TV scene. 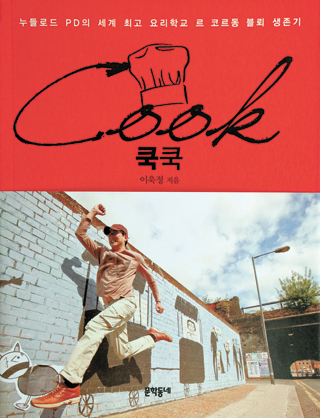 Lee published a book entitled “Cook” (2012) out of his experiences at Le Cordon Bleu’s branch in London where he learned how to cook.

After achieving unexpected success with his seven-episode “Noodle Road,” which followed the history of noodles through the East and West and the substantial anthropological tale underpinning noodles in history, he took off to enroll in the London branch of the prestigious culinary school Le Cordon Bleu. It was a brave move for a budding producer.

For two years in London, he not only completed basic, intermediate and superior levels of cuisine training, but also a pastry course.

Last year, Lee released another food-related documentary entitled “Food Odyssey,” in which he traveled to more than 20 countries to introduce some of the most exotic and interesting cuisines and stories related to them. It was a huge project that cost 2.4 billion won ($2.2 million) and took two years.

However, his admiration for food, as well as his firm belief about what it can do for humankind, did not stop there.

From April, Lee launched a daily cooking show, “Wook’s Food Odyssey,” in which he is the star.

“This pizza is something of a miniature space,” Lee explained in a recent interview with the Korea JoongAng Daily at his studio in a back alley of bustling Hongdae in western Seoul. He took a sizzling Italian pizza out of a wood-fired oven installed in his studio.

“It is invaluable because it embraces the culture of sharing, which I think is why pizza became a globally popular dish,” he said. “Ever since humankind started cooking, thousands of recipes came along, but only a few of them have survived. Foods like pizza, bread and noodles not only overcame the limitation of time, but also regions. My documentaries started from a fundamental question: What do these cuisines have in common and how did they influence the lives of humanities?”

During the rest of the talk, Lee discussed the food-related adventures he wants to take in the future and the insights he has developed about the world’s cuisines.

Here are highlights from the interview.

Q. How does it feel to stand in front of a camera and run a less than 10-minute daily show instead of the hourlong weekly program you were used to doing?

A. It’s physically harder which makes me think again about mothers who prepare food every day (laughs). However, a feature-length documentary isn’t as appealing as before. And extracting only eight hours of content from two years of preparation was considered too meager. So I thought viewers would be able to relate to a daily show by someone who has actually been there and experienced the food. He becomes the storyteller and demonstrates the recipe.

One of the distinctive traits of “Wook’s Food Odyssey” is that it introduces various cuisines from all over the world instead of putting an emphasis on Korean dishes. Why is that so? 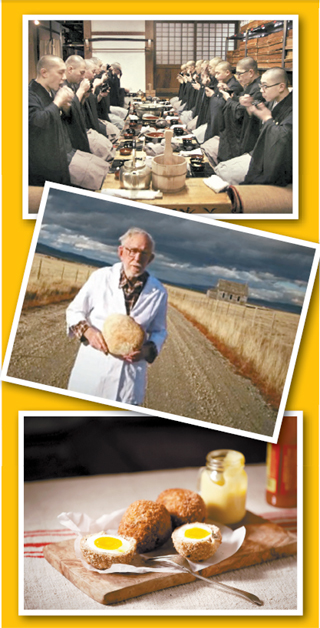 Yes, most of the dishes that appear in my show are unfamiliar to Koreans in contrast to many cooking shows these days that concentrate on well-known recipes so viewers can follow them easily. What I wanted to do was to tell the stories and of the people and cultures who actually make these dishes. I believe that experiencing a foreign country’s cuisine, and being impressed by it, is the best way to understand and embrace another culture.

How is the response from the viewers?

They say that the show provides intellectual joy and entertainment at the same time. I can see many bloggers following the recipes that I have introduced, which is one of the most worthwhile things about running this show.

You have traveled around the world, meeting prominent figures in each country’s culinary scene. What is the status of Korean food on the global stage?

There has been a big change for sure in the past 10 years. At first, there was not a single mention about Korean cuisine in the gourmet world nor the media. Korean restaurants in foreign countries were only visited by Koreans or those who had Korean friends.

But it is a totally different story now. You can easily find Korean cuisine in prestigious media outlets’ dining sections and many top-notch chefs utilize kimchi or doenjang in their recipes.

Do you have any suggestion on how to make Korean cuisine more globalized?

Rather than organizing showy events abroad, we should focus on nurturing better Korean restaurants at home that are filled with our cultural hues. A restaurant tells a lot about that country because it is where visitors can instantly absorb an ambience through its interior, dishes, the staff’s uniforms and how the menu is written.

Then it should be followed by supporting qualified chefs to run the place. And that chef doesn’t necessarily have to be Korean. We should make our recipes an open source and make them available for all sorts of variations.

Interest in cooking, as well as dining out at nice restaurants, seem to have reached a new pinnacle in Korea. How do you see this phenomena?

People’s notions about food and cooking, which used to exist solely to fill our hungry stomachs, have changed into play, something fun.

In the past, having discussions about cooking or what to eat, or how something tastes, were considered shallow subjects. Also, when Koreans went abroad, they didn’t spend much on dining at Michelin-starred restaurants, but saved up to buy another luxurious bag. However, the trend is shifting rapidly. People now value culinary culture and consider it as an enjoyable cultural asset.

The fact that the trend is generating many star chefs suggests a great turning point too. When men start to take interest in something, it will bring great changes to that industry, just like it did for the fashion business.

How did your experience at Le Cordon Bleu influence your career as a producer?

I obtained important insights about food that would have been impossible had I just kept making documentaries on food. The fact that I became an insider was important.

For example, if you don’t know how to make a croissant, you will never know how great an invention that type of bread is. You have to constantly put a coat of butter in between the thin layers of dough. Knowing this remarkable process, I filmed in detail and in high resolution the process in my documentary “Food Odyssey.” The series resembles more of a music video because it doesn’t have interviews or narration, which are the conventional ingredients of a documentary.

I thought those steps were unnecessary because all of that information is available within a second on Wikipedia. I thought that giving a spark of interest to the viewers was important. If people got interested, they can search the Internet by themselves afterward.

It seems like you never follow the rules. First, you merged food content with a documentary format, which was unprecedented at the time here in Korea. Then you went to culinary school to learn cooking. And now you’ve left your safety zone behind the camera and became a TV personality. Do you always enjoy breaking the rules?

When I was a junior at work, one of my senior colleagues came up to me and said, ‘How about making a documentary that doesn’t follow the conventional rules?’ I answered that I didn’t know what “conventional” is supposed to look like.

So naturally, all of my productions were somewhat different from the traditional format. I don’t think about the risks too much because that only leads you to worry about how bad the result may be. I think that is how I will live my life in the future as well.

You sure are a hard worker. Don’t you ever want to take a break?

For the past two years, I haven’t had more than a three-day break. I can’t take time off because I enjoy doing my work so much. Life is too short and the ardent fervor and energy will disappear too quickly. I want to take what I have achieved so far and my passion a little further. I started my daily program even before the documentary concluded. But now I kind of feel like I need some rest after all (laughs). If I do take time off, I think I will just lie low at home because I have traveled to other countries as part of my job too much.

What do you want to keep doing in the future?

Ultimately, I want to help Koreans embrace the culture of other countries. And I strongly believe that food is one of the most effective mediums to achieve that. I am always open to hear ideas about unique food cultures suggested by foreign companies, embassies and cultural institutes so they could be shown in future documentaries.

For the time being, I thought about taking off to a remote village, some place in Spain or another countryside, to make a documentary about plowing a farm and learning distinctive recipes from local grannies and natives. Its title is tentatively “Stealing Recipes.” How innovative is that? (laughs).