One master hitter, many teachers

One master hitter, many teachers 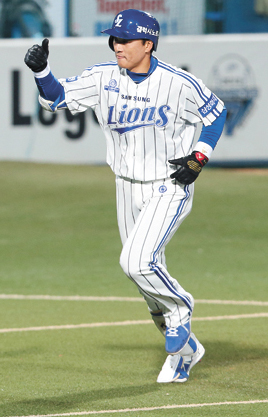 When Samsung Lions slugger Lee Seung-yuop hit 41 home runs for the Yomiuri Giants in Japan in 2006, many baseball people in Korea claimed credit for helping the 38-year-old lefty batter.

When asked about how he became the “People’s Hitter,” Lee just laughed and said: “Those stories all sound like a cartoon.”

Then who can really be called Lee’s teacher?

“When I joined the Lions as a pitcher in 1995, Woo and Lee proposed that I swing the bat just for a month,” said Lee. “It became one year and then two years. I later realized that both of them wanted to make me a hitter from the start.”

The nine-time KBO Golden Glove winner started out choking up at bat and was more of a contact hitter. That began to change when Baek In-cheon, the only player in KBO League history to hit .400, became manager of the Lions in 1996.

“When Baek asked me whether I wanted to be a contact hitter or a home run hitter, I answered home run hitter without giving it a thought,” said Lee. “I didn’t know if I would hit many home runs, but Baek found my potential and possibility.”

Lee was Baek’s favorite player. “Just look at Lee,” the 71-year-old manager often said. “He is a smart guy and that’s why he plays baseball well.”

In 1997, Lee became the youngest player to win the KBO home run title by hitting 32.

In 1999, he hit 54 homers and four years later the Daegu native set what was then the single season Asian home run record with 56.

On his way to becoming the league’s best hitter, Lee gave a lot of credit to batting coach Park Heung-sik, who is now with the KIA Tigers.

“Coach Park was like a brother in the neighborhood,” said the five-time KBO MVP. “I relied on him mentally and he gave me lot of help with techniques, teaching me a Major League Baseball style of hitting.”

When Lee is in a slump, he watches another teacher: Ken Griffey Jr. The 45-year-old left-handed batter, who is sixth on the all-time MLB career home runs list with 630, is known for his smooth swing.

In his first year with the NPB’s Chiba Lotte Marines in 2004, Lee hit just .240 with 14 home runs. It was a difficult time for the five-time KBO home run king. But the following year, Kim Sung-keun, now manager for the Hanwha Eagles, became Lee’s personal hitting instructor.

“With Kim as my instructor, I had no time to rest,” Lee said with a smile. “My body and mind were tired.”

Unlike others, the 72-year-old Kim didn’t just praise the eight-time KBO All-Star. Instead, he told him to play baseball as if he were hungry and not look for excuses. Under Kim, Lee hit 30 home runs in 2005 and moved up to the Yomiuri Giants.

After launching his 400th home run in the KBO against the Lotte Giants on June 3 in Pohang, Lee said the record was achieved not because of his skills, but because he had good teachers along the way in his career.

Yet Lee just may be his own best teacher this season, as he was as a hardworking rookie in 1995 and a slumping slugger in 2005 when he pulled himself out of it.

“I work hard to not be lazy,” Lee said. “I can’t forgive myself for not training properly just because of my age. As I respect whomever I face, I always say to myself, ‘I can beat the opponent. I must.’”