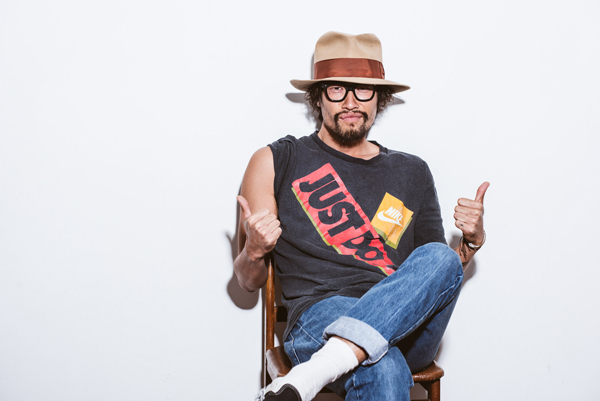 From teenage hoodlum to corrupt prosecutor, the 35-year-old maverick has met the public through various characters, all of which possessed that distinctive Ryoo flavor.

After being away from the movie scene for a while, he has come back with a milder, though not necessarily mundane, character: Ji-nu in Im Sang-soo’s latest film, “Intimate Enemies,” which opened in theaters Thursday.

Ji-nu is an intern living in studio apartment trying to gain employment as a regular worker, not exactly an ideal model for a joyous life. However, he never fails to maintain his optimism and conviviality, whatever the situation.

Along the way, he falls in love with Na-mi (Go Joon-hee) and does something that could jeopardize his position at work.

In a recent interview with the JoongAng Ilbo, an affiliate of the Korea JoongAng Daily, Ryoo said he wants to live a life “that doesn’t wear makeup.”

The actor, who is featured throughout the film with a naked face, said it is his way of “being true to myself.”

Below is an edited excerpt from the interview.

Q. I’ve heard that you accepted the role in “Intimate Enemies” via email while you were staying in Paris for three years. What drew you to Im’s work?

A. I didn’t think I would do movies again, but I felt that this could become a work of my life. I liked that it deviated from the conventional format. I am a fan of Im, too.

Why did you leave Korea in the first place?

I wanted to have time on my own away from the disarray of so many thoughts. By devoting my time wholly to myself, my life’s values and directions changed. I used to think that I was being overly commercialized, and I don’t want that anymore. Since I was far away, I kind of thought works that would make me into a product would naturally get filtered. Or maybe it was just that I was absent from the industry.

What did you do before coming back to Korea?

Just before I left for Korea, I spent two weeks in the desert in Spain, not wearing anything. It was to clear up my body and mind before shooting.

Your change may come as a surprise to many of your close acquaintances. How are they responding?

Yes, even my older brother [film director Ryoo Seung-wan] was startled at my change of views. Maybe I was surprised at myself, too, knowing that I could change so much. The three years I spent in France completely shook me up. Cultural shocks and the influences of people I met and books I read there all contributed to who I have changed into now. I want to evolve as a person, not a commercialized product.

Director Im described your character Ji-nu as a lovely offbeat. Can you add to that?

Ji-nu knows how to listen and respect other people. His attitude is not showy. If there were a person like Ji-nu in real life, I would want to befriend him.

What was it like to shoot a love scene with Na-mi, played by Go Joon-hee?

I tried to make it fun and sexy. They don’t think about the complicated relationship that will follow; they just like each other as they are in the moment.

What kind of films do you want to be in?

When on a vegetarian diet under the influence of my girlfriend when I was in Paris. I thought that anything with too many condiments is not good. I don’t want to do films that don’t have a cause. I don’t have the intention of acting for money, honors and applause. I am planning on doing films that are similar to me, so I guess that I am getting further away from being a star (laughs).