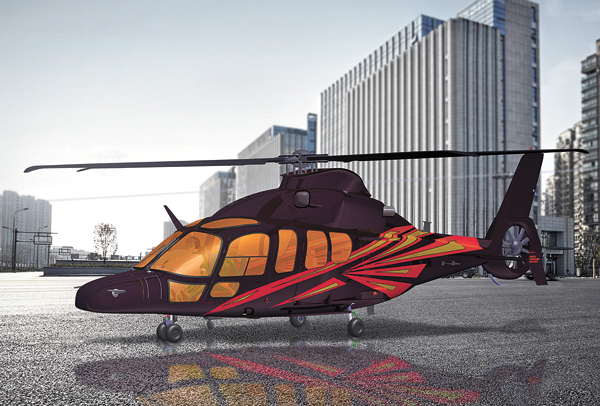 Computer rendering shows the light civil helicopter that will be developed by Korea Aerospace Industries. Provided by the company

Korea Aerospace Industries (KAI) says it will work on developing civil and military helicopters at the same time, the first time in the world a defense company will undertake two such projects simultaneously.

KAI announced Thursday it has contracts to develop core technologies for a light civil helicopter (LCH) with the Ministry of Trade, Industry and Energy and to manufacture a light armed helicopter (LAH) with the Defense Acquisition Program Administration.

The biggest benefit of jointly developing civil and military helicopters is that will save 340 billion won ($306 million) as 62 percent of the parts will be used for both models.

KAI said it will utilize Airbus Helicopter’s platform for its best-selling H155 and receive technology from the French company.

After finishing development, KAI will be the sole manufacturer for the helicopters, but will work with Airbus Helicopter on marketing and sales.

Since the French manufacturer will stop producing the H155 after the LCH and LAH are developed, KAI is expected to increase its share of the global market for small helicopters.

Cumulative H155 sales have surpassed 1,000 to more than 60 clients in France, Israel, the United Arab Emirates and Brazil. Airbus Helicopter had 20 percent of the global market share for civil helicopters in 2014.

“We expect to have a market share of 35 percent,” said a spokesman for KAI.

KAI also expects the project to improve the overall infrastructure of the country’s aviation industry, as 16 research institutes and university labs will work on 15 core helicopter technologies, including automatic flight control system software.

Twelve other companies will join the project to make 56 parts for the civil helicopter, and KAI will select partners for 18 other parts. For the armed helicopter, 20 companies will work on developing military devices necessary for integrated logistics support.

The LAH will replace aging 500MD and AH-1S helicopters used by the Korean military by the end of 2022. The units will be designed to carry air-to-surface missiles, turret guns and antiaircraft weaponry.

The civil unit is expected to ready by the end of 2020. By using a ducted fan-type tail rotor, it will offer safer operating conditions for pilots compared to similar sized models and be able to fly from Seoul to Jeju Island without refueling.

“It will help the company to be recognized as a decent helicopter maker in the global market,” said Ha Sung-yong, president and CEO of KAI. “We aim to sell a combined 1,000 units of the LAH and LCH, including 600 units for export.”