Park vetoes bill, angrily tells reps to do their jobs

Park vetoes bill, angrily tells reps to do their jobs 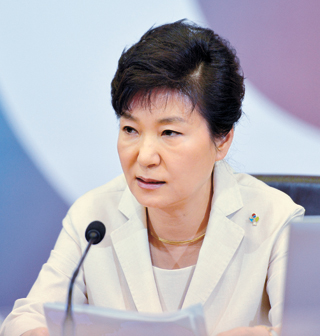 President Park Geun-hye articulates in a cabinet meeting at the Blue House on Thursday her veto of a revision to the National Assembly Act which would strengthen the National Assembly’s authority to demand changes in administrative legislation, such as presidential decrees and the prime minister’s ordinances.[Joint Press Corps]

President Park Geun-hye on Thursday declared war on lawmakers - even from her own party - lashing out at their cynical political bargains and sending back to the National Assembly a contentious piece of legislation.

Park hosted a cabinet meeting Thursday morning at the Blue House and gave an unusually lengthy and straightforward opening preface. In an angry tone, Park spent 10 out of 16 minutes condemning lawmakers for having failed to cooperate with the government’s efforts to improve the economy and for merely chasing their own political gains. She urged the public to pass verdicts on them in the next elections.

And she vetoed a revision to the National Assembly Act that had been supported by her own party in a political deal with the opposition to secure passage of another piece of legislation that made major reforms to the civil service pension system.

“The revision to the National Assembly Act, which is highly likely to be unconstitutional, was sent to the government on June 15,” Park said. “Without proper deliberations, the bill was passed overnight in return for the civil servants’ pension reforms, a completely unrelated issue. 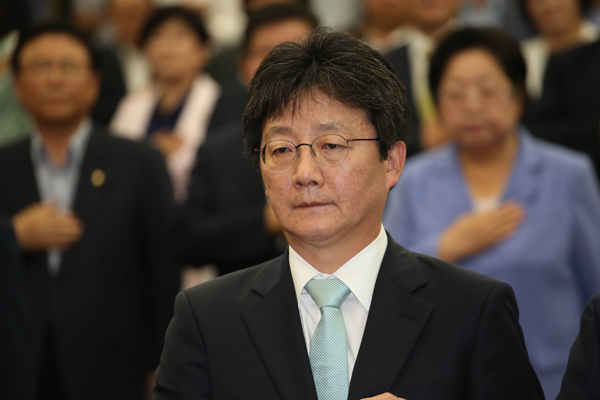 “Before passing that revision, the legislature and the politicians should have done their best to approve bills aimed at improving people’s livelihoods, but they dealt with items only concerned with their own political interests first and in haste. I felt heartbroken seeing this situation,” Park said. “The ruling party, which should have helped the government, has not done so, and paralyzing the administration’s operation with this revision will cause a national crisis, so I have no choice but to veto this bill.”

After months of difficult negotiations on the pension reforms, the ruling party agreed to a demand by the main opposition New Politics Alliance for Democracy (NPAD) to revise the National Assembly Act. In return, the NPAD voted for the pension reforms.

Both the pension reform bill and the National Assembly Act revision were passed on May 29. After Park threatened a veto of the latter, the National Assembly changed the wording of the revision to allow the legislature “to make a request” to the government to change a piece of administrative legislation, rather than “demand,” and sent it for her signature on June 15.

But she vetoed the bill Thursday.

The president then issued a rare and strongly worded rebuke of the ruling Saenuri Party, practically pressuring its floor leader, Rep. Yoo Seong-min, to step down. Yoo, a non-mainstream lawmaker from outside the faction of Park loyalists, was elected as chief negotiator in February based on a pledge to put the Saenuri Party back at the center of decision-making with the Blue House. Throughout his term, Yoo has been assertive in getting his demands heard by Park and confronted the Blue House over various issues.

“Politicians exist not for their political lives, but for the people, but their behavior isn’t improving,” Park said. “I am skeptical that the floor leadership of the ruling party made any efforts to seek the National Assembly’s cooperation for the administration and the ruling party’s attempts to help the economy.

“Politics represents the people and speaks for the people,” Park said. “It should not be used to serve a politician’s philosophy and reasoning.”

Presidential aides said Thursday that Park’s frustration with the ruling party has built up over recent months and finally exploded.

“It’s been more than two years since she took the office, but the bills for economic recovery are still stalled at the legislature and she was very disappointed about the situation,” an aide told the JoongAng Ilbo. “Because the bills were stuck, the government used administrative legislation as a work-around, but now the ruling party is using those as a bargaining chip. That will completely tie the president’s hands, so it was natural for her to react sensitively.”

Park said the voters must make correct choices in elections to establish a new political culture. “The politics of betrayal, in which you violate trust after winning an election, will end up mass-producing the politics of hegemony and factionalism,” Park said. “And the people must judge them through elections.”

The ruling and opposition parties each held general assemblies of their lawmakers to respond to Park’s veto of the National Assembly Act revision and her criticism of the legislature.

The president’s attacks on the National Assembly instantly stopped all legislative tasks. A voting session had been scheduled for 2 p.m. Thursday to approve about 60 bills including a special law to cope with the outbreak of Middle East respiratory syndrome (MERS), but it was postponed to the evening.

Chairman Moon Jae-in of the opposition NPAD said Thursday that Park was passing the buck of her incompetence to the National Assembly.

“She is starting a fight against not only the opposition party but also the entire National Assembly and representative democracy,” Moon said. “We will fight resolutely. Not only our party, but the legislature must jointly work together.”

He urged the ruling party to fight the president, saying it should no longer serve as her rubber stamp. Moon proposed that the heads of the ruling and opposition parties and the National Assembly speaker have a meeting to discuss the situation.

Moon also pointed out that Park in 1998 had co-sponsored a similar revision to the National Assembly Act, but was now conveniently oblivious of it. “Is Representative Park a different person from President Park?” Moon asked.

The ruling Saenuri Party also held a meeting of its lawmakers in the afternoon. Sources said they mainly discussed how they would handle the veto, although speculation was high that the lawmakers would discuss the fate of floor leader Yoo amidst growing pressure from Park loyalists for his resignation.

After the conference, Yoo said he humbly accepts criticism for having failed to manage the party’s relationship with the Blue House successfully. He, however, rejected the demand to step down, and the ruling party members also decided to keep him in his post.

The party also decided that it will not participate in any future vote to pass the revision again. If no vote takes place on the revision in the next 11 months, the remaining term of the 19th National Assembly, it will automatically be discarded.

Earlier in the morning, Saenuri Chairman Kim Moo-sung said the party would respect the presidential veto. “This is not a political issue. It is a matter of legal interpretation,” he said, shortly after Park vetoed the bill. “I will consult with our lawmakers about our next step.”

National Assembly Speaker Chung Ui-hwa has promised to arrange another vote if Park vetoes the revision, and he issued a statement Thursday that he would follow through with the pledge. He, however, noted that the voting could not take place if the ruling party, which controls 160 lawmakers in the legislature, boycotts it.

When the National Assembly approved the revision last month, 211 lawmakers, more than two-thirds of the 298 sitting members, approved it. A two-thirds vote can overturn a presidential veto.