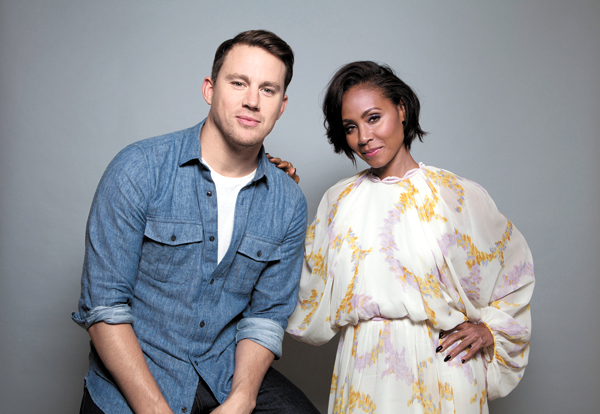 Actors Channing Tatum, left, and Jada Pinkett Smith pose for a portrait in promotion of the new film, “Magic Mike XXL,” in West Hollywood, California. The movie releases in the U.S. on Wednesday. [AP/NEWSIS]

WEST HOLLYWOOD, California - When Jada Pinkett Smith got the call from her agent about the “Magic Mike” sequel script, there was something she needed to know: Her part as Rome, the owner of a male strip club, was written for a man.

She was skeptical, if intrigued.

Pinkett Smith had actually been thinking about the world of strippers. Though she had never set foot in a strip club, she had just wrapped up a documentary for CNN in Atlanta that dealt with strip clubs and sex trafficking.

She agreed to Skype with “Magic Mike” star and producer Channing Tatum and director Gregory Jacobs.

“That was a very interesting call,” she said.

Originally, Tatum had wanted Jamie Foxx for the role. He wanted to show people the side of Foxx he had seen during a fun party, but it did not work out “for a lot of reasons.”

It ended up being the best thing for the film, which comes out Wednesday.

“The spirit of the thing was always supposed to be a woman,” said Tatum. “We were just a bunch of guys sitting here trying to come up with what is inside of a woman’s mind and it’s like, ‘Idiots, you should just ask them.’”

“I think the selling point for me was when Channing said, ‘Listen, I really think that there’s a level of responsibility and celebration that we can bring to this whole form.’ I thought that was a radical freaking idea,” she said, her experiences in Atlanta at the top of her mind. “If we could really elevate what is happening in these environments, how awesome would that be?”

So they got to work making Rome a woman, resting heavily on Pinkett Smith’s input on who exactly this enigmatic club owner from Mike’s (Tatum) past should be.

The road-tripping strippers (including Tatum, Matt Bomer, Joe Manganiello and Kevin Nash) do not meet up with her until about halfway through the film. Though the guys are bigger than life, it is the diminutive Pinkett Smith who dominates the screen as soon as she is introduced - the queen of her own empire of luxury and desire where men (including the likes of Michael Strahan, Donald Glover and Stephen “Twitch” Boss) exist purely for the pleasure of the female patrons.

“I created a philosophy that this is a woman who looked at eroticism and sexuality as a gateway to enlightenment,” said Pinkett Smith.

“We didn’t have to do very much. We just got out of the way,” added Tatum, who meant it pretty literally, comparing her energy to that of a lioness.

“It’s like, ‘no one move. If you don’t look at it in the eyes, it won’t attack you. Try to feel powerful! Don’t show weakness!’” he laughed.

The dynamic shifts only when the guys perform. Pinkett Smith, who takes over the MC role for Matthew McConaughey’s Dallas in a key scene, was more than happy to sit back and watch with feverish female extras. And they were not just acting - their reactions were real, she said.

“It was the show of our lives. Really. It’s the creme de la creme. It’s not going to get any better than that. To have a front row seat watching Channing and Twitch? Just shut it down. It’s over,” she said.

And yet, “Magic Mike’s” phenomenal appeal is something that Tatum still cannot really wrap his head around. The 2012 Steven Soderbergh film about male strippers and the economy cost only $7 million to produce and ended up grossing $113.7 million domestically.

Tatum thinks they “caught a wave” off of the “Fifty Shades of Grey” phenomenon, as the book had come out a year prior..

“I wouldn’t have read that and thought ‘women empowerment,’ but it definitely somehow turned them on. And I don’t mean sexually. I just mean the switch was turned on,” said Tatum.

Still thinking of what she learned in Atlanta, she made it clear that respect is paramount.

And perhaps the positivity of “Magic Mike” could catch on. Pinkett Smith even got a call from her sister-in-law in Philadelphia who had seen the film and decided she wanted to open up a place just like Rome’s.

“I would stake a very large part of my bank account on there being little Romes popping up everywhere,” said Tatum. AP