MERS outbreak appears to be finally dying out

MERS outbreak appears to be finally dying out 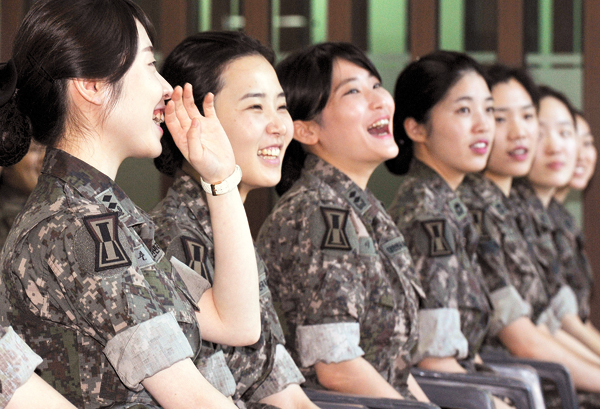 Military nurses who were dispatched to Dae Cheong Hospital in Daejeon to help with the MERS response laugh at a farewell party on Monday at the hospital. Dae Cheong Hospital, which was under quarantine for the last four weeks, reopened on Monday. By Kim Seong-tae

With no new patients reported for two days, Korea’s outbreak of Middle East respiratory syndrome (MERS) seems to be dying out.

The university hospital is at the center of attention in the waning days of the outbreak. Exposure to Patient No. 76 and Patient No. 173 put about 4,800 people under quarantine through July 6.

“We keep monitoring the ward and intensive care unit where Patient No. 173 stayed, and their medical workers,” said Jeong Eun-gyeong, an official of the Korean Centers for Disease Control and Prevention (CDC). “Only three to four people are exhibiting possible symptoms and we are carrying out testing as soon as people show symptoms.” 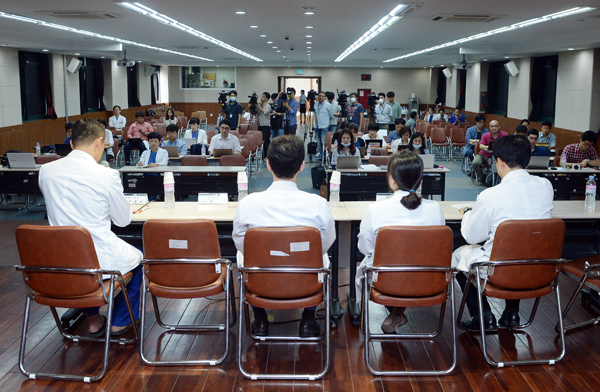 Officials of the National Medical Center describe the condition of Patient No. 1 at the hospital in central Seoul on Monday. Patient No. 1, who contracted the disease on a business trip to the Middle East, is now negative for the disease.[NEWSIS]

As of Monday, 93 out of all 182 MERS patients in Korea, or 51.1 percent, have fully recovered and were discharged from hospitals. With 32 deaths, the fatality rate was 17.6 percent, far lower than the fatality rate for the disease worldwide, which was 40.6 percent before the Korean outbreak. But of the 57 people still being treated, 14 are in unstable condition.

Among those under treatment is Patient No. 1, a 68-year-old male who began the outbreak with the virus he contracted on a business trip to the Middle East in May. He tested positive on May 20, and his health became unstable at one point. But Patient No. 1 was moved out of a quarantined hospital room and into a normal ward on Monday.

“The reason we did not make an official announcement that [Patient No. 1] fully recovered even after he tested negative twice,” said Kwon Yong-jin, an official of National Medical Center, “is because he is still suffering from MERS-oriented complications such as bed sores and a tracheotomy.”

Kwon also emphasized that Patient No. 1 did not intentionally lie about his itinerary in the Middle East, saying he was not in a condition to properly answer questions at the time. The Ministry of Health and Welfare previously said they could not properly quarantine the man in the early stage because the 68-year-old said he had only traveled to Bahrain.

“He might have looked fine when he arrived at the hospital, but actually, he wasn’t able to communicate,” Ahn Myoung-ock, a director of the hospital, added. “He couldn’t speak properly due to the tracheotomy at this time.”

It’s been more than 40 days since Korea was confronted the potentially fatal respiratory disease and analysts say if the government was better prepared, it could have been contained at an early stage.

However, the investigators were all novice public health doctors doing their compulsory military duty. They had only two weeks of epidemiological methodology training.

The CDC itself gets along with lots of contract workers. Currently, out of 930 employees of the CDC, 624 are nonsalaried.

“When we get a new project, we renew their contracts by one year and they usually stay four to five years,” said a CDC official. “It is hard to bring in talented people because the positions are mostly nonsalaried and monthly wages are less than half of doctors’ who open their own clinics.”

There are not even many doctors at the CDC. Only 22 people, or 2.36 percent of the entire staff, are licensed doctors qualified for quarantine and epidemiological investigations.

“The CDC was born deformed because it was just expanded from the National Institute of Health 10 years ago,” said Kang Dae-hee, dean of Seoul National University’s College of Medicine. “Most of the employees are there for research and not many of them are there for quarantine or epidemiological studies.”

Kim Yoon, a professor of health policy and management at Seoul National University, says experts were needed to take the lead in the outbreak.

“Most decisions were made by officialdom such as the Blue House or Ministry of Health and Welfare,” Kim said in an interview with the JoongAng Ilbo on Monday. “The CDC Director, who is supposed to fully understand and give orders, was just called in to ministers for briefings.”

Kim said it’s imperative that the CDC achieve independence from the government.

“There should be legal guidelines for the CDC so that they can independently control the situation in crises,” Kim said. “If the director is named as a vice-ministerial level official, the center will become stronger and will not have to waste time reporting to other authorities.”

He also called for better grooming of epidemiological experts.

“Talented people will go to the CDC only when they can work on their expertise for 20 to 30 years and become high level officials there,” Kim added. “It is difficult to attract them now because the positions don’t look promising in the future.”