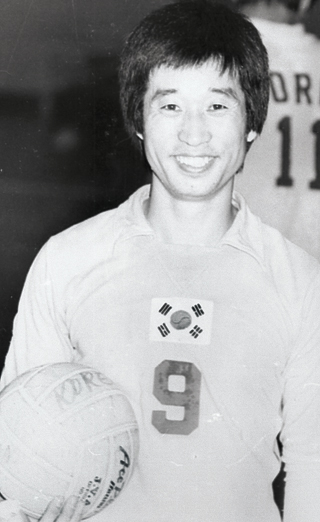 While Cha Bum-kun highlighted the power of Korean athletes with his feet in Germany in the 1980s, Kim Ho-chul was doing the same in Italy, albeit with his hands.

Regarded as one of the best setters in Korean volleyball history, Kim was also a top star in Italy in the 1980s, earning nicknames like magico (magician) and mani d’oro (golden hands). Despite his height of 175 centimeters (5-foot-9), short by international standards, Kim was among the first Korean players to shine overseas.

Born in Miryang, South Gyeongsang in 1955, Kim was a promising mid-distance runner at Milju Elementary School. In fifth grade, he won the national junior championship in 1,500 meters, representing South Gyeongsang.

But Kim found running too solitary, and began to look for a sport he could play with his friends. After coming across students playing volleyball, he knew he had found the sport that would become his life. 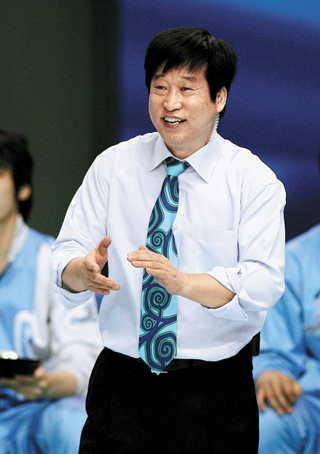 Kim both ran and played volleyball until the end of elementary school. But his father urged him to focus on running, saying it would be more difficult to excel in a team sport.

Kim was so valuable as an athlete his school did not want him to graduate. Milju Elementary School worried Kim’s graduation would ruin its fierce competition with Miryang Elementary School, so the school persuaded Kim’s father to legally change his son’s birthday from January 13 to November 13 so that he could repeat sixth grade.

After going to Miryang Middle School, Kim focused solely on volleyball, first as a left attacker.

His impressive performance in competitions caught the attention of scouts in Seoul, and Kim later was transferred to Daeshin Middle School. The school also wanted Kim to stay longer, so it held him back his sophomore year.

Kim grew fast in middle school, becoming one of the tallest volleyball players for his age.

By the time he reached Daeshin High School, Kim’s height was no longer exceptional, but his technique far exceeded his age. He later cemented his position as a setter.

“At that time, volleyball wasn’t divided like these days and I had to play all positions,” he said. “As a result, my technique and basic skills were good.”

His volleyball career at Daeshin High School blossomed, as the team won almost every national event.

However, his father still did not like him playing volleyball.

“My father never saw me play until I was in my second year of high school,” he said.

By the time he became a freshman at Hanyang University, Kim was selected for the national team preparing for the 1976 Summer Olympics Asian qualifiers. But the lefty setter was not a regular member for the team, as its many senior players took the core roles.

He became a central member of the team two years later, helping Korea win the 1978 Asian Games and reaching the semi-finals at the FIVB Volleyball World Championships in Rome the same year.

In 1979, Kim also helped win the Universiade and Asian Volleyball Championship as a national team captain.

Earning the nickname “computer setter” for his accurate tosses to attackers, Kim joined Gold Star volleyball team in 1980 after graduation. Just a year later, Italy’s Maxicono Parma recruited him with a $10,000 signing bonus and a monthly salary of $5,000, nearly double what local players received back then.

In 1981, he married Lim Kyung-sook, also a volleyball player.

However, life in Italy was not easy because of differences in culture and the language barrier. In his first year, he kicked teammate Gianni Lanfranco during a game, claiming that he mocked his plays.

Despite the difficulties, he stayed with Parma and helped the team win the Italian league in 1983 and 1984, earning league MVP each season. He was also given the best player award by Italian journalists in 1982.

Kim returned to Korea in 1984 to join Hyundai Motor Service (now Hyundai Capital Skywalkers) and helped the team to win various national competitions, along with the league MVP award in 1986.

Kim returned to Italy in 1987 with Sisley Treviso, a second division team then sponsored by Benetton. He played a pivotal role in getting Treviso into the first division. He later moved to Schio Sport, playing until the age of 40.

After retiring as a player, Kim began coaching in Italy, managing clubs like Parma, Sisley Treviso, Porto Ravenna and Trieste. However, Kim did not impress as a coach.

After eight years of in Italy, Kim returned to Korea in 2003 to coach former team Hyundai Capital.

At that time, the V-League was dominated by the Samsung Fire Bluefangs, who were sweeping all domestic events.

In 2004, he managed to end the Bluefangs’ 77-game winning streak. The following year, he led the Skywalkers to take the regular season title, though the team lost to the Bluefangs in the Championship Series.

But in 2006 and 2007, Kim won the V-League Championship two seasons in a row, claiming V-League Coach of the Year both seasons. In 2006, he also led Korea’s national team to gold at the Asian Games.

After those two big seasons, Kim struggled to make an impact and eventually stepped down as coach in 2011. After spending time as a commentator with MBC Sports+, Kim returned to the court as a coach for Seoul Dream Six (now Woori Card Hansae) in 2012, and made the league-bottom team a playoff contender.

After an impressive season with Dream Six, Kim returned as coach for the Skywalkers in 2013, trying to end the Bluefangs’ dominance once again. He did not succeed, and he resigned this March after the team failed to enter the post season for the first time in its history.

It is not clear if he will coach again, but he is sure that volleyball will always be a part of his life.

“I’m a volleyball man and I even solve my stress with volleyball,” he said. “If I quit coaching, I want to help Korean volleyball as an administrator.”