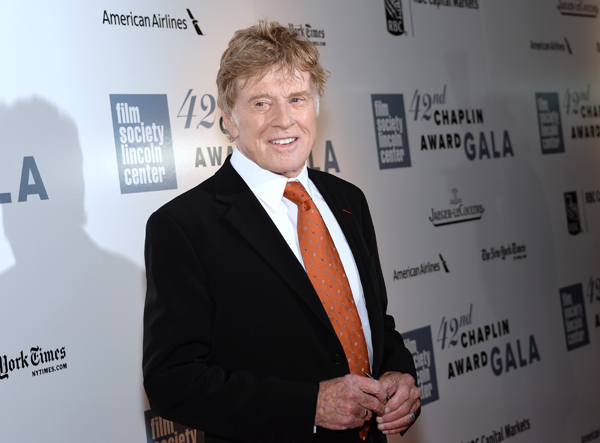 UNITED NATIONS - Robert Redford said he came to the United Nations Monday not as an actor but as an environmental advocate, father, grandfather and concerned citizen to urge the world’s nations to take action now on climate change.

The 78-year-old Oscar winner said his environmental activism began more than 40 years ago and has grown stronger as he has seen the threat of global warming grow.

He told a high-level meeting of the UN General Assembly on climate change that “the time for half measures and climate denial is over.’’

“It is the overwhelming judgment of science that climate change is real, and the result of human activity,’’ Redford said. “Everywhere we look, moderate weather is going extinct.’’

The mission of the 193 UN member nations, he said, “is as simple as it is daunting: save the world before it’s too late.’’

Redford urged world leaders to adopt an universal climate agreement in Paris in December to keep global warming from rising to dangerous levels.

“Nothing less than the fate of our planet will hang in the balance,’’ he said.

Redford told a news conference later that he hopes to be in Paris to keep pressing for immediate global action.

Redford recalled growing up in Los Angeles near the end of World War II when it was a beautiful city with clean air.

But he felt “the city that I loved was taken away from me’’ because of the pollution, skyscrapers and freeways, so he moved and discovered the Sierra Nevadas and Yosemite Park where “I was introduced to the beauty of raw nature.’’

“And that’s when I decided I want this to be part of my life, whatever I do,’’ Redford said.

Since then, he said, “I divided my life into my two greatest interests which were art and nature.’’

WAKEFIELD, Rhode island - A man charged with trespassing at Taylor Swift’s Rhode Island mansion wants the singer to testify on his behalf.

The Westerly Sun reports that 24-year-old Nicholas Field was back in court Friday.

He was arrested April 14 and charged with willful trespassing at Swift’s beachfront mansion.

Field says he wants Swift to be served with a subpoena to appear in court on his behalf.

Police say surveillance video shows Field going up to the gate at Swift’s property to deliver a letter and poem.

They say Field was manipulating the gate when he was arrested.

Field says he wants to see the surveillance video, which was not available Friday.

It’s unclear whether Field is being represented by an attorney.

The case has been continued to July 10. AP