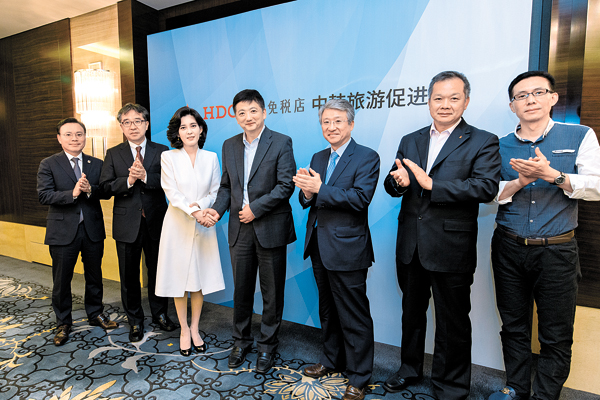 Hotel Shilla CEO Lee Boo-jin, third from left, and Xie Shaogang, head of China Travel Service, agree to promote the tourism industry of both countries after a meeting Tuesday in Beijing. Provided by Hotel Shilla

With confirmed new cases of Middle East respiratory syndrome (MERS) not emerging for the past three days, consumer sentiment may be on a recovery track as shoppers flock to sales events at major department stores.

The first weekend is seen as a barometer for the entire sale season as it typically accounts for more than 30 percent of total receipts.

And data showed that Lotte, Shinsegae, Hyundai and other department stores saw sales growth of 1 to 3 percent compared to last year.

With unusually hot weather, sales of beer and other beverages were up 25.4 percent, while those of leisure clothing and sportswear rose 13.5 percent and accessories 11.9 percent.

Shinsegae reported a 1.7 percent increase in sales, with sales of kitchenware red hot at 45.8 percent higher than last year.

“June sales, which had fallen by as much as 8 percent, turned positive for the first time this month on Friday and Saturday,” a Shinsegae official said. “Household goods sales were particularly strong as MERS has sparked interest in home cooking.”

“I came out after spending many days holed up at home since the MERS outbreak,” said a 60-year-old housewife Tuesday at Lotte Department Store in Jamsil. “We have not seen confirmed new cases for days now, so I came out to see if there were any nice sale items.”

But a paucity of foreign tourists continues to weigh on duty-free shops, where sales in June fell by about 30 percent year-on-year.

In an effort to contain the negative effects of MERS on the inflow of foreign tourists, Lee Boo-jin, CEO of Hotel Shilla, traveled to China on Tuesday to firm up relationships with major Chinese tour companies and urge them to encourage more their clients to consider visiting Korea.

CTS and CYTS are major tour companies in China. HDC Shilla in May signed an MOU with CTS to collaborate on attracting more Chinese tourists to Korea.

The group asked the companies to help “create various Korea tour packages for the July and August tour season, so that Chinese tourists will again return to the country.”

“As Korea’s MERS situation is showing signs of containment, more Chinese tourists will probably follow,” said Xie Shaogang, head of CTS. “We will actively support increasing the attractiveness of Korean tourism by creating packages that combine shopping, culture and sightseeing.”

The group also met with officials at the China National Tourist Administration and Ministry of Foreign Affairs to “properly explain the situation in Korea and ask for [the Chinese government’s] encouragement of visits to Korea,” Hotel Shilla said in a statement.

If the MERS outbreak continues through August, overall losses in sectors including the tourism industry are estimated to be as much as 8.1 trillion won ($7.2 billion), according to the Korea Institute for Industrial Economics and Trade.

The figure will rise to more than 13 trillion won if the outbreak persists for until October.

In addition to the tourism industry, restaurants and hospitality businesses, transporters and leisure businesses will be hit hardest, according to the institute.

The number of Chinese tourists who have signed up for tours of Korea in July and August - a typically busy tourist season - has fallen 80 percent compared to a year ago, industry insiders say.