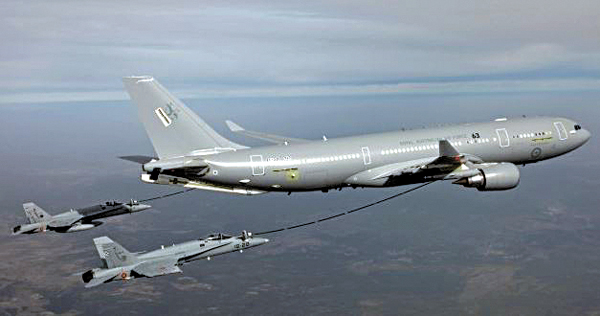 The Defense Acquisition Program Administration (DAPA) announced the decision Tuesday after a two-month bidding process to procure four in-flight refueling tankers between 2018 and 2019. The deal will be worth 1.4881 trillion won ($1.33 billion).

This was the first time a European manufacturer was selected to supply aircraft to the Korean Air Force in recent years.

Officials said the bids by Airbus and Boeing were neck-and-neck until the end.

Officials said the dual-role refueling and transport aircraft A330 MRTT was selected for its cost, fuel capacity and conditions to transfer technology to help develop Korean fighter jets.

“Before we held the defense acquisition committee meeting, there was neck-and-neck competition between the A330 MRTT and the KC-46A,” a DAPA official said. “In the process of reviewing procurement of general weapons, a ranking is usually decided upon and then discussed by the committee. However, in this committee meeting, amid fierce discussion, a close decision was made.”

Because of ongoing investigations into shady defense procurement deals, the DAPA official emphasized that the review process for the tanker procurement involved more transparency and objectivity than ever before. The process was delayed because of a budget deficit.

The procurement of aerial refueling tankers is expected to expand the scope of aerial missions.

An Air Force official said, “If [fighter jets] can carry more weapons instead of fuel, and can refuel aerially, it will be possible to have a larger scope and carry out more effective operations.”