National Assembly will vote on bills next week

National Assembly will vote on bills next week 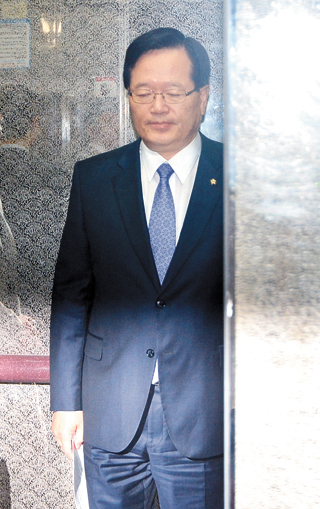 The legislature has been paralyzed since President Park Geun-hye vetoed a revision to the National Assembly Act.

The speaker of the National Assembly said Tuesday he will hold a plenary session next week to end the stalemate - and that the vetoed bill will be voted on again.

But the Saenuri Party is expected not to support it this time around, and the vote is expected to fall far short of the two-thirds needed to overcome the presidential veto.

In the same session, other work will be accomplished, the speaker vowed.

On May 29, the National Assembly passed a controversial revision to the National Assembly Act that would strengthen lawmakers’ power to request changes to administrative legislation such as presidential decrees. It was part of a political deal between the ruling Saenuri Party and the main opposition New Politics Alliance for Democracy (NPAD). In return for the revision, the two parties also approved a plan to reform the money-losing civil servants’ pension, a signature project of President Park.

Park, however, vetoed the revision on Thursday, angrily criticizing the lawmakers’ wheeling and dealing and demanding the resignation of the floor leader of the ruling party for having made the deal. After Park sent the revised bill back to the legislature, the ruling Saenuri Party held a meeting of its lawmakers and decided that it will respect the president’s objection to the bill and withdraw their earlier support for it.

The National Assembly speaker said Tuesday that he decided to use his authority to introduce the bill for reconsideration at the plenary session, despite the ruling party’s change of mind, to respect the Constitution.

“As the head of the legislature, following the steps stipulated in the Constitution is the way to protect the Constitution and respect procedural democracy,” he said. “It is also a duty as the National Assembly speaker.”

Clause 4 of Article 53 of the Constitution stipulates, “In case there is a request for reconsideration of a bill, the National Assembly reconsiders it, and if the National Assembly repasses the bill in the original form with the attendance of more than one half of the total members, and with a concurrent vote of two-thirds or more of the members present, it becomes law.”

That doesn’t mean the Saenuri lawmakers will actually cast votes.

“Even if we attend the plenary session, we are going there to pass other bills,” said Rep. Yoo Seong-min, floor leader of the Saenuri Party. “We’ve already decided that we won’t participate in the vote for the revision, and I don’t think that position has changed.”

If the Saenuri lawmakers do not participate in the vote, no vote can actually take place on the revision bill, because a quorum wouldn’t be met.

Chung said the NPAD leadership has promised to normalize legislative operations if a plenary session is confirmed to reconsider the vetoed bill. “I hope standing committees will immediately start working today as they promised to resolve pending bills concerning the economy,” Chung said.

After Chung’s announcement, Rep. Lee Jong-kul, floor leader of the NPAD, said his party’s lawmakers will go back to the legislature. Although Park has condemned the lawmakers for being slow to pass her economic bills, her criticism ironically paralyzed legislative activity.

In addition to the National Assembly Act revision, the ruling and opposition parties are expected to address the government’s demand to create a supplementary budget. The Park administration said it wants it to be at least 15 trillion won ($13.44 billion), but the Saenuri Party thinks that amount is too high.

About 60 bills that were originally scheduled for the June session will be voted on at Monday’s session, according to Chung.