With high hopes, GM Korea touts its ‘Next Spark’

With high hopes, GM Korea touts its ‘Next Spark’ 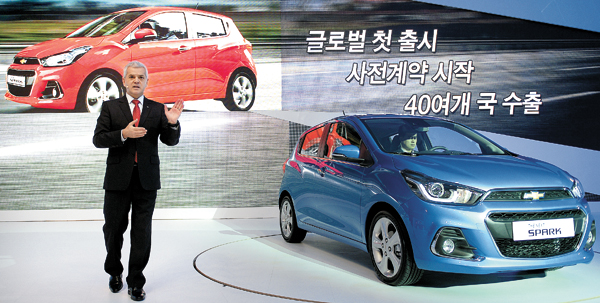 GM Korea CEO Sergio Rocha introduces the Next Spark at the Dongdaemun Design Plaza in central Seoul on Wednesday. [NEWSIS]

Chevrolet has rolled out a revamped model of its popular minicar Spark, calling it “The Next Spark” and setting the ambitious goal of becoming Korea’s No. 1 automaker in the compact segment.

Unveiled at the 2015 Seoul Motor Show in April, the new car was the focus of a GM Korea media showcase on Wednesday at the Dongdaemun Design Plaza in central Seoul. The company will start selling the car in August and said it has started accepting preorders. GM Korea said the new Spark should be attractive to buyers because of premium safety options that have not been offered on other mini cars; the company also touted the car’s improved fuel efficiency. It took five years, GM Korea said, to develop the second-generation Spark at its design center in Bupyeong, Incheon, and at its Warren Technical Center in the United States. The company will start full production in July at its Changwon plant in South Gyeongsang. The company beamed the media event to viewers on the Internet.

This new minicar is important for GM Korea to reach a double-digit market share in Korea. The company has recently hovered around the 8 percent mark. The “old” Spark accounted for 35 percent of GM’s total sales this year through June.

The new Spark will also be exported to 40 foreign markets, GM said.

Executives of the company, including CEO Sergio Rocha, radiated confidence about reclaiming the leading spot in Korea’s minicar market segment. They predicted that the new model would be a sea change in perceptions of minicars, and said consumers would recognize the difference the first time they rode in the new model.

“We’re proud to introduce this Next Spark for the first time in Korea, which is also the first time in the world,” Rocha said at the launch program. “We aim to be a leader in the minicar market; this model improves its predecessor’s segment-leading driving performance and has a new design style. There is no doubt that this Spark will set the basic concept of minicars in Korea.”

GM Korea said the Next Spark offers a variety of entertainment systems to accompany its improved driving performance. Before the event, the company offered reporters a test ride to judge for themselves.

One of the noticeable features in this new Spark is that it is the first Korean car with Apple CarPlay, which allows drivers to use a navigation system, place phone calls, send text messages and listen to podcasts through the car’s touch screen and Siri’s Eyes Free mode. After connecting an iPhone to the car’s USB drive, the car immediately recognized the phone. Using Siri, Apple’s artificial-intelligence personal assistant, a reporter was able to make phone calls, send text messages and select music without touching the phone while driving.

In a test drive, Spark showed its lively side. In a trip of 106 kilometers from the Dongdaemun Design Plaza to Namyangju, Gyeonggi, the car showed itself to be peppy, including during some high-speed driving at more than 120 kilometers per hour, which is very satisfactory in the minicar segment.

The company also touted the new Spark’s safety options. It said more than 70 percent of the car’s body is made of high-tensile sheet metal; all packages have side air bags for both the driver’s and front passenger’s side. A forward collision alert, lane departure warning and side blind spot alert systems, which have not been offered on minicars until now, are also included. The price options are also a surprise. The Eco LS is priced at 12.27 million won ($10,971) and the C-Tech LTZ, the highest-priced model, costs 14.99 million won. The company also lowered the prices of the LT and LT Plus models in the C-Tech line, by 230,000 won and 90,000 won, respectively. The loaded C-Tech LTZ variant was increased in price by only 130,000 won.

“The price strategy reflects our determination to reclaim the company’s No. 1 position in the minicar segment in Korea,” said Lee Kyung-ae, GM Korea’s marketing director. “We upgraded the overall driving efficiency, and some features like CarPlay could appeal to young customers.” The company didn’t reveal the sales goal for this year for the new Spark, and said only that it expects the new Spark to be the best-selling minicar in Korea by the end of 2016. Its biggest competitor will be Kia Motor’s Morning; Kia sold 42,648 units this year through June, about 17,000 units more than Spark sales. The Morning’s 1-liter gasoline turbo model sells for 14.4 million won.