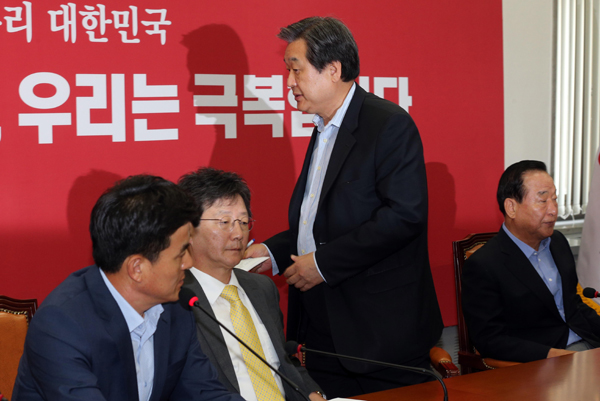 Ruling Saenuri Chairman Kim Moo-sung walks out of the party’s Supreme Council meeting at the National Assembly on Thursday as Rep. Kim Tae-ho continues to demand its embattled floor leader, Yoo Seong-min, step down. Chairman Kim had repeatedly asked him to refrain from discussing the issue. By Kim Sang-seon

The factional schism inside the ruling party grew wider on Thursday after its chairman angrily ended a meeting with senior leaders and stormed out of the room in an effort to stop bickering among lawmakers over the president’s demand to sack its floor leader.

During the Saenuri’s Supreme Council meeting, Rep. Kim Tae-ho attacked the party’s embattled floor leader, Rep. Yoo Seong-min, who was earlier accused by President Park Geun-hye of making political deals with the opposition for his own gain.

When President Park last week vetoed a revision to the National Assembly Act, which strengthened lawmakers’ authority to demand changes in administrative legislation, she also demanded that the ruling party floor leader step down.

The ruling party had supported the contentious bill in order to secure the passage of another piece of legislation to overhaul the money-losing pension system for civil servants, a key project pushed by the president.

Criticizing the practice of political bargaining, Park rebuked the Saenuri, pressuring Yoo to step down for his “politics of betrayal.” Yoo, however, has refused to resign.

But though Saenuri Chairman Kim Moo-sung has prohibited ruling party lawmakers from making provocative remarks about Yoo’s fate or discussing the issue in the media, Kim Tae-ho did not hesitate to demand Yoo’s resignation.

“His pride, honor and will to power are important, but the stability of this administration is more important,” he said. “I have never seen a case of success when a family is split internally. For the party and the country, I urge him to make a courageous decision.”

“I cannot understand why Yoo needs to step down,” he said. “You are going just too far. What good will it do for the party and for Yoo to make a reasonable decision?”

Won added that the party needed to give Yoo some time to think about the situation and decide on his own fate.

When Kim tried to rally back, the Saenuri chairman quickly stopped him, declaring the meeting over and storming out of the conference room.

But as other Supreme Council members and their aides started leaving the room, Kim Tae-ho continued to speak. “There is a clear reason for him to step down. Why is it so hard when this issue puts the party in such a difficult position?”

Before the angry exchange, Yoo briefed the Supreme Council about National Assembly affairs, but did not mention the president’s demand. The embarrassing altercation took place before journalists and a video clip of the quarrel was aired by TV networks throughout the day.

Later in the afternoon, Saenuri Chairman Kim said that halting the meeting was a courtesy to Kim Tae-ho for repeatedly pressuring Yoo to step down.