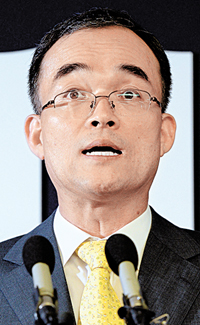 The investigation of the so-called Sung Wan-jong list - eight political heavyweights accused by a businessman from beyond the grave of taking his payoffs - fizzled out after three months. Only two of the men were indicted.

A special investigation team dedicated to Sung’s list announced its interim results on Thursday at the Seoul High Prosecutors’ Office and also the effective end of the probe.

It’s been 85 days since Sung, the late chairman of Keangnam Enterprises, hanged himself from a tree branch on Mount Bukhan in Seoul on April 9 with a list of eight members of President Park Geun-hye’s inner circle and payoff amounts in his trouser pocket.

Sung also made allegations of payoffs in an interview just hours before his death.

It’s been 82 days since the special investigation team was formed with some 10 prosecutors on April 12.

“Since Sung, who claimed to have bribed the eight, is dead, we’ve looked for his secret ledger but concluded that there is no such a thing,” said Mun Mu-il, head of the investigation team. “We’ve indicted only South Gyengsang Gov. Hong Joon-pyo and former Prime Minister Lee Wan-koo for violating the political funding law.”

The prosecutors also specified how the two accepted briberies from Sung.

According to the prosecution, Governor Hong met with former Keangnam Enterprises Vice President Yoon Seung-mo at his office at the National Assembly in June 2011 and accepted 100 million won ($88,800). Hong was then a supreme council member of the Grand National Party, the predecessor of the ruling Saenuri Party, and was running for chairman of the supreme council.

The prosecution indicted him for violating the political funding law given that the money was believed to help Hong win the election.

Former Prime Minister Lee is suspected to have received 30 million won directly from Sung on April 4, 2013, when Lee was running in a local by-election for Buyeo and Cheongyang counties in South Chungcheong.

“In the case of former Prime Minister Lee, we’ve found the exact time when he received the money,” Mun said.

Hong and Lee made announcements Thursday denying the allegations.

“I’m falsely charged and I feel frustrated,” Lee was quoted as saying by Suh Zun-weon, a director of the Youido Institute and an aide to Lee, on Thursday. “I’ve never accepted a bribe from Sung. As an incumbent lawmaker, I’ll serve my constituency and reclaim my reputation by running in the general election next year.”

Lee stepped down from the Prime Minister position on April 27 over the payoff scandal, becoming the country’s shortest-serving prime minister, having survived only 70 days.

Hong released a statement on Thursday that read, “I can’t believe that the mention of me on Sung’s list was true and the mention of all others was false, and I regret that the prosecution has made a politically motivated decision.”

“I can’t accept the [prosecution’s] decision when I have nothing to do with Sung and I’m probably the farthest person from Sung,” the statement read. “This case is only meant to avoid investigation of [President Park Geun-hye’s] presidential campaign funding, so I will fight in court to seek the truth, prove that I’m innocent and reclaim my reputation.”

The special investigation team decided not to indict six others on the list, mostly due to lack of evidence.

President Park’s former Chief of Staff Huh Tae-yeol, who was accused of accepting 700 million won from Sung in 2007, and incumbent Chief of Staff Lee Byung-kee, whose name was on the list without an amount of money mentioned, were let off because prosecutors could not find evidence against them.

Sung claimed in an interview with a local newspaper only several hours before he committed suicide that former Presidential Chief of Staff Kim Ki-choon, Lee’s predecessor, received $100,000 at a fitness club of the Lotte Hotel in Seoul in September 2006. The prosecution did not indict him, citing the statute of limitations for the crime, which is seven years.

The special investigation team also disclosed the result of its investigation of the late former President Roh Moo-hyun’s two special pardons for Sung in May 2005 and December 2007.

Roh’s brother Roh Geon-pyeong was believed to have to have played a key role in securing the special pardons.

It was suspected that Roh Geon-pyeong was bribed by Sung to arrange the first pardon in 2005. The prosecution acquired a statement that an executive of Keangnam Enterprises handed 30 million won to Roh after the pardon.

For the other presidential pardon in 2007, Roh allegedly received another 500 million won and Sung’s aides allegedly visited Roh three times in December 2007.

However, Roh was acquitted as the statutes of limitations for his charges had already expired.

For the second pardon in 2007, the main opposition New Politics Alliance for Democracy Chairman Moon Jae-in, who was former President Roh’s Chief of Staff, and then-Unification Minister Lee Jae-joung, who is now serving as Gyeonggi superintendent, were also accused of having been involved, but they were let off due to lack of evidence.