Citizens do their part in the MERS fight

Citizens do their part in the MERS fight 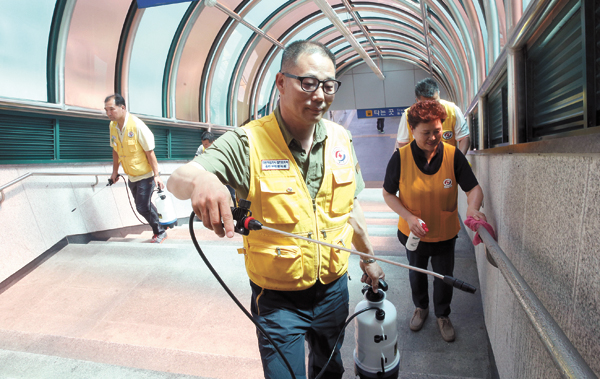 Kang Gil-mo, 54, sterilizes Seojeong-ri Station in Pyeongtaek, Gyeonggi, on Wednesday with other volunteers in order to prevent the spread of Middle East respiratory syndrome (MERS). Kang and about 40 other volunteers have taken measures since June 17 to sterilize subway stations and traditional markets in Pyeongtaek. By Kang Jung-hyun

Even though Korea saw another confirmed case of Middle East respiratory syndrome (MERS) on Thursday, the first in five days, the outbreak itself appears to be waning. Patient No. 183, a nurse at Samsung Medical Center who tested positive, is presumed to have contracted the disease as she took off her protective gear.

Without another massive transmission within a medical facility, the disease is expected to disappear in about a month or so, and the government is currently considering declaring the outbreak officially over following two maximum latency periods - 28 days total - after the last patient is confirmed.

Given the health authority’s poor handling of the disease in its early stages, it is considered fortunate that the virus dissipated so soon, which is considered to be in large part due to the valiant efforts of ordinary citizens - those who were willing to make sacrifices amid national fears over its spread.

The JoongAng Ilbo recently interviewed a few of those individuals, some of whom were reluctant to be featured in the newspaper, saying they had done nothing but what was expected of them.

Lee Jun-ho, 50, the owner and director of a hospital in Daegu, voluntarily closed the facility after treating a suspected MERS patient.

“A patient who was treated at Samsung Medical Center visited our hospital. Since he had a cough and a high fever of 38.7 degrees Celsius [101.66 degrees Fahrenheit], I thought it was very likely that he may have come in contact with the disease. He was only a suspected patient but could have very well become a confirmed patient within the latency period of up to 14 days.

After he left my hospital, I immediately closed it down because other patients here could have potentially become infected. The hospital was closed in line with his possible latency period, and in the end he didn’t end up testing positive for MERS.

Ahn Yong-hyeon, 49, taxi driver, wasn’t able to be with his mother when she passed away because he was quarantined at his home.

“I gave a ride to Patient No. 90 on June 6 in Okcheon County, North Chungcheong. I was notified the next day that I had to stay home and have no contact with others. I didn’t step outside my house from June 7 to 20. I used to smoke two packs of cigarettes a day, but I didn’t smoke at all for the two weeks to stay completely at home.

While I was isolated, my mother passed away, and I was heartbroken that I couldn’t see her during her last moments. I cried for over an hour. As soon as I was discharged, I washed the car, just in case, and went to her grave. I begged her for her forgiveness.

Kang Gil-mo, a 54-year-old volunteer, gathered 40 people together to sterilize the subway stations and traditional markets in Pyeongtaek, Gyeonggi.

“We took preventive measures at four subway stations and three traditional markets in the Songtan area starting on June 17. We soaked soft clothes with disinfectant and rubbed doorknobs, ticket gates, market stalls and so on.

I volunteer for the Korean Red Cross, and I gathered people together after hearing that the local health care center was falling short of manpower. They must have been afraid of catching the disease, but 40 people came for help.

We wore masks because of dust, and then some passersby told us that the announcement that MERS could spread through the air was a lie. So we took our masks off. Vendors from the market also complained because we were spraying disinfectant while they were trying to sell food. We sprayed it on the backs of our hands to reassure them that it was safe.

I feel proud to see fewer people on the street with masks. We will keep doing this until the disease is gone for good.”

Eom Dae-yong, a 37-year-old funeral director at Chungnam National University Hospital, held funerals for the MERS victims who were not welcomed by other directors.

“I held funerals for four MERS victims. I wore protective clothes when I sealed the bodies, put them in their coffins and moved them out for cremation. I’ve worked as a funeral director for 12 years, but this is my first experience dealing with those who have died from infectious diseases.

When I took the first body to the crematorium on June 12, I was really worried about infection. I was taught how to wear and take off protective clothing, but I was still concerned because I have a family, children. But it was my job and I shouldn’t avoid it. Someone has to take care of the deceased. Thinking about how there were plenty of medical workers coming into direct contact with MERS patients helped me overcome my fear.

But once the fear is gone, there is a sense of discomfort. These people couldn’t help being infected, and they couldn’t say goodbye to their loved ones and weren’t put in [the traditional clothes for the deceased] just because they are MERS patients. I prayed for their souls so many times.”

Lim Hong-seob, a 52-year-old doctor, closed his own hospital after treating a suspected MERS patient.

“On June 6, we admitted a patient in very serious condition. He had a high fever and a cold. When we asked him whether he visited other hospitals, he said he had visited a patient at Samsung Medical Center. We immediately reported it to the health authority.

I didn’t even think of the financial losses in closing the hospital. My only thought was to prevent the disease from spreading. It was a sure thing for a doctor.”

“To at least help those in need, I partnered MERS patients and potential patients with psychiatrists. About 70 doctors joined, and so far we’ve provided consultations to more than 20 people. One of them was a woman who had a daughter attending kindergarten. She was quarantined at home after coming into contact with a MERS patient, and she was extremely terrified by it. Mostly it was because she was isolated from the outside world, but she got better after every session we had. We will keep providing ‘psychological quarantine’ until the outbreak is over.”

Kim Tae-jin, 82, a resident of Jangdeok Village in Sungchang, North Jeolla, stayed at home with his disabled wife for two weeks.

“My village was completely sealed off from June 5 to 19. My wife and I were asked to stay at home, and it was like being in prison for two weeks. My wife injured her spine and can’t use her legs. I used to take her on my motorbike to a hospital in town for physical therapy, but we couldn’t leave the village and it was tough for her. But I told her that we should do this because many others out there were doing the same thing too. I’m proud that we went through it as members of society.”

Gang Chang-ha, 47, a taxi driver, isolated himself at home even though there was no direct order.

“I drive a taxi in Andong, North Gyeongsang, and I took a regular customer to Samsung Medical Center on June 1. I knew people had contracted MERS at a general hospital in Seoul, and I learned on June 7 that it was at Samsung Medical Center. Even though Patient No. 14 wasn’t there the day I went to the hospital, I quarantined myself at home starting June 7. I didn’t want to be the one who spread the disease in Andong.”

Kim Seong-eun, 31, a Gangnam District civil servant in southern Seoul, was happy to check on those quarantined at home.

“I was in charge of monitoring union members at an apartment in the district who had come into contact with Patient No. 35. I decided to be like a son to them to prevent the disease as much as I could. I was supposed to call them twice a day, but I called them four to five times a day. Instead of asking what was on the checklist, I talked to them for 20 minutes, inquiring about every single detail. They opened their minds to me as well. I was very thankful to see a text message that read, ‘Thank you for your help - To a model supervisor from a model quarantine patient.’”